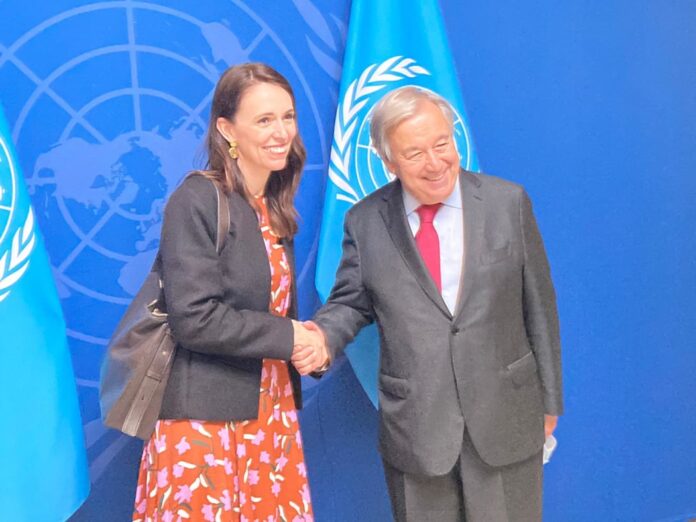 Prime Minister Jacinda Ardern has held a formal meeting with the United Nations secretary-general against the backdrop of the escalating war in Ukraine.

Ardern is in New York for the UN general assembly where leaders have gathered to grapple with world crises.

She said the meeting with Guterres covered issues including the war in Ukraine, the role of the Indo-Pacific in the Russia-Ukraine conflict, and also challenges facing the Pacific including climate change.

A UN statement released after the meeting said Guterres thanked New Zealand for its “stalwart support to multilateralism”.

“The secretary-general and the prime minister exchanged views on global security, including the consequences of the war in Ukraine, as well as challenges facing the Pacific region,” the statement said.

“We cannot go on like this,” he said. “We have a duty to act – and yet we are gridlocked in colossal global dysfunction.”

She also attended President Volodymyr Zelensky’s “powerful” address to the general assembly and joined a standing ovation at its conclusion.

Ardern has found time for other events on the sidelines: overnight she sat down with Chile President Gabriel Boric for the first time.

She also briefly attended a climate function for Pacific leaders chaired by Fiji Prime Minister Frank Bainimarama and was invited to give an impromptu speech.

“When it comes to the most significant security issue that our region faces, it is by far and away the issue of climate change,” Ardern said.

Some countries worry the focus on Russia’s war is displacing other existential crises such as the climate crisis.

Ardern yesterday attended a reception hosted by United States President Joe Biden which was open to all leaders.

She said she also had a brief conversation with Biden while in London for the Queen’s funeral.

She earlier told media that Putin’s actions were an “extraordinary escalation” of the conflict and called for a “rallying cry from the world”.

“What you see in Ukraine is illegal,” Ardern said. “It is immoral.”

“It is causing a loss of civilian life, and that loss could extend if – as Putin has claimed – he expands the types of weapons used in this war,” she said.

NZSIS’ advisory role on immigration security risks to be clarified