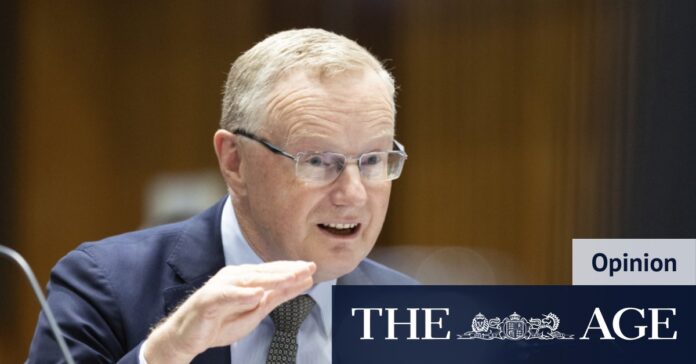 When added to all the mechanistic, mathematised rules of the standard model, [it] takes us a lot further in understanding what the hell’s been happening to the economy.

“Prior to the pandemic, it was very difficult for a business person to stand in the public square and say they were putting their prices up. And a common theme from our liaison [regular interviews with business people] was that because most businesses had trouble putting their prices up, wage increases had to be kept modest. That was the mindset.”

Mindset? Mindset? That’s not a word you’ll find in any economics textbook. There’s no equation or diagram for mindsets.

Today, however, “business people are able to stand in the public square and say they are putting their prices up, and they can point to a number of reasons why.

The community doesn’t like it, but there is a begrudging acceptance. And with prices rising, it is harder to resist bigger wage increases, especially in a tight labour market,” Lowe said.

“So, the psychology shifts. Or as the Bank for International Settlements put it in its recent annual report: when inflation is high, it becomes a coordinating mechanism for pricing decisions.

In other words, people really start to pay attention to changes in costs and prices. The result can be faster and fuller pass-through of cost shocks and more frequent price and wage adjustments.”

“There is some evidence that is already occurring, which is contributing to the strength of the pick-up in inflation,” Lowe added in his speech earlier this month.

To be fair, this is just the latest version of a thesis – a “model” – Lowe has been developing for years. And I think he’s on to a phenomenon which, when added to all the mechanistic, mathematised rules of the standard model, takes us a lot further in understanding what the hell’s been happening to the economy.

It’s taking the standard model but, contrary to its assumptions, accepting that, as the social animals that humans are, economic “agents” – whether consumers, bosses, workers or union secretaries – have a tendency to herding behaviour.

Anyone knows who has worked in business for a while – as many econocrats and academic economists haven’t – business behaviour is heavily influenced by fads and fashions. One role of sharemarket analysts is to punish companies that don’t conform to the fad of the moment.

The world’s economists spent much time between the global financial crisis and the pandemic trying to explain why all the rich economies had spent more than a decade caught in “secular stagnation” – a low-growth trap.

I think Lowe’s found a big piece of that puzzle. Business went through this weird period of years, when because no one else was putting up their prices, no one wanted to put up their prices.

The inflation rate fell below the Reserve’s target range, and stayed there for years. Businesses had no reason to invest much, so productivity improvement fell away, and economic growth was weak.

But then, along came the pandemic, lockdowns, huge budgetary and monetary stimulus, borders closed to immigrants, and finally a massive supply shock from the pandemic and the Ukraine war.

Suddenly, some big price rises are announced, the dam bursts and everyone – from big business to corner milk bars – starts putting up their prices. The spell has broken, and I doubt we’ll go back to the weird world we were in.

But the other side of the no-price-rises world was an obsession with using all means possible – legal or illegal – to cut labour costs. This greatly reinforced the low-growth trap we were caught in. But it was made possible also by the various developments that have robbed workers of their bargaining power.

It’s not yet clear whether the end of the self-imposed ban on price rises will be matched by an end to the ban on decent pay rises. If it isn’t, we’ll still be lost in the woods.

After Going ‘Freed from L.G.B.T.,’ a Polish City Pays a Worth