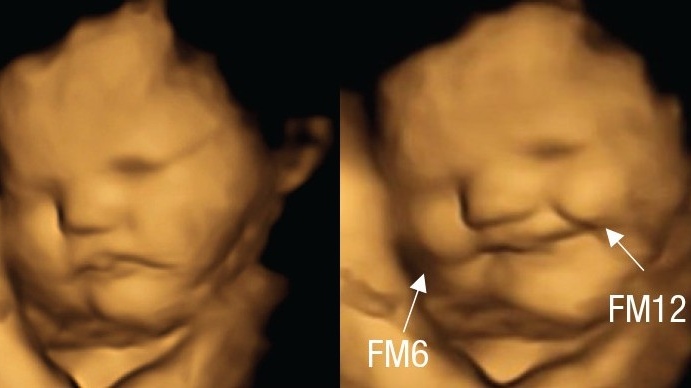 
It turns out that kids are not the only ones picky about vegetables. Fetuses between 32 and 36 weeks gestation can also appear to grimace over kale and smile for carrots, according to a small study out of the U.K. that examines how fetuses react to flavours.


The peer-reviewed paper, published in Psychological Science, looks at fetal chemosensory reactivity and found that fetal facial movements could be detected within 30 minutes of the parent taking just a single, 400 mg dose of powdered carrot or kale in a capsule, the equivalent of about 50g of raw vegetables. These facial movements together form expressions that appear like “laughter-face” or “cry-face”.


“We think that this repeated exposure to flavours before birth could help to establish food preferences post-birth, which could be important when thinking about messaging around healthy eating and the potential for avoiding ‘food-fussiness’ when weaning,” said lead researcher Beyza Ustun with Durham University’s Department of Psychology in a statement.


This is the first longitudinal study that suggests fetuses can detect chemosensory information through the foods consumed by the parent, the authors said.


“Results of this study have important implications for our understanding of the development of human oral and nasal chemoreception, including the nature and timing of behavioral reactions to prenatal flavour exposure, fetal engagement of memory for flavours,” researchers concluded in the paper.


Previous studies have shown that most molecules can cross through the placenta and that the fetuses begin sensing their environment for the first time through the amniotic fluid. Earlier research examined changes in the flavor of the amniotic fluid after ingesting different foods, or measured reactions in babies after they were born.


One earlier study found that babies had less nose wrinkling, brow lowering and head turning behaviours and expressions over carrot flavoured cereals if they had been exposed to the flavour during the third trimester of pregnancy, compared to those who had not been exposed.


In the latest study, researchers found that, within a brief period, the flavours in the capsules were digested and absorbed into the bloodstream, then metabolized, reaching fetal chemoreceptors in about half an hour.


One hundred participants between the ages of 18 and 40 from northeast England were involved in the study from 32 to 36 weeks of gestation. Researchers measured the outcome by capturing frame-by-frame fetal facial movements through real-time 4D ultrasound recordings.


Researchers found that fetuses that were exposed to the kale flavour gave increasingly more complex “cry-face” expressions as they matured, like “lower-lip depressor,” “lip stretch,” and lip presser.” Those exposed to the carrot flavor generated more “laughter-face” expressions, but the movements did not become more complex over time. The study only looked at reactions of the fetuses and does not examine whether the reaction stems from actual enjoyment or dislike of the taste.


“This contrasting result can be explained by the anatomical substrate engaged in generating laughter-face and cry-face gestalts,” the authors explained, noting that the single movement of pulling the lip corner upwards is enough to make the “laughter-face” but several different facial movements are required to create the “cry-face” expression.


There are some limitations to the study, the authors noted. Information for the control group, which was not exposed to any flavours, could not be collected at the same frequency as those taking the capsules. Facial responses by the fetuses could also be influenced by the kinds of vegetables the parent consumed normally. Another variable that could have affected results is the genetic variations in bitter taste perception and sensitivity.


Researchers are now conducting a follow-up study with the same cohort after they were born to see if their acceptance of different foods were influenced by their experiences before birth.

Why Ottawa is being asked to decriminalize small amounts of drugs