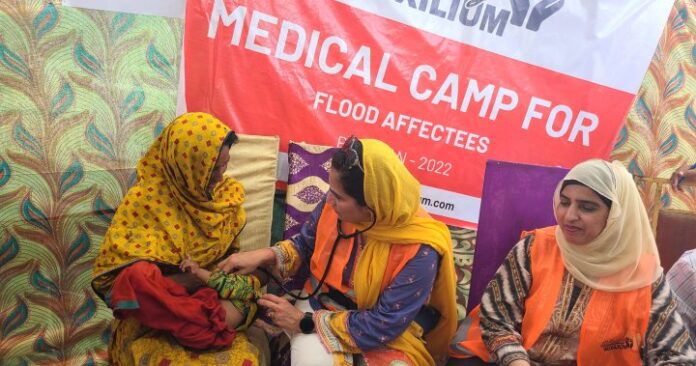 Dr. Fozia Alvi made a quick return to her practice at East Airdrie Medical Centre this week, jetlagged and traumatized from a whirlwind trip to her previous home country.

She spent 10 days alongside other doctors with health-care non-profit Humanity Auxilium, building a field hospital and treating about 800 patients a day in Pakistan.

“I thought that I have seen it all, but that devastation… I don’t have any words to describe it,” said Alvi.

“They were literally starving to death.”

Pakistan floods: More than 1,200 dead as aid pours into nation

There are an estimated 33 million people affected by Pakistan’s historic flooding. More than 1,200 are dead.

Mazoor Babar has family, including elderly parents, in one of the hardest-hit regions. He said their agricultural land is completely under water and his dad’s gas station was wiped out.

“He’s okay. But his business is gone.”

But for those like them fortunate enough to escape the immediate dangers, there is another growing threat.

“Due to the stagnant water there is such large cases of Malaria and sometimes unexplained cases of fever,” said Alvi.

Even those supplying humanitarian aid say it’s a struggle to obtain the necessary tools and medicine to treat the non-stop flood of patients.

“I have not seen that amount of sick children,” said Alvi. “When I went to the field camps, the women surrounded me. Almost all of the pregnant woman I saw, I knew they’re going to die tomorrow.

Pakistan floods: WHO warns diseases could ‘get out of control’ as 9 more die

“The children were taking showers in the the stagnant water and there were animals — dead animals — in there.

“So I’m worried about epidemics, even pandemics coming out of there.”

Alvi is now part of a rotating crew of visiting doctors working to set up an operating room and trying treat as many patients as possible.

And, while she’s home, Alvi is also doing everything she can to rally support, including from the federal government.

The Canadian government announced $5 million in funding support for Pakistan in August, allocating an additional $25 million for flood relief. The federal government is also matching donations to the Humanitarian Coalition up to $3 million until Sept. 28.

“The grant should match the disaster that is going on. And it will encourage other countries as well to follow the Canadian example.”

Woman ‘Tricked’ to Believe She Was a D.E.A. Agent Trainee, Official...

Russia claims eastern city in Ukraine, aims to seize all of...