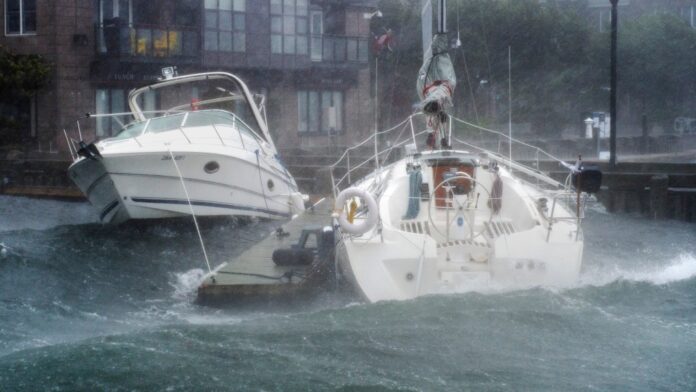 
Hurricane season is often associated with tropical regions, but Atlantic Canada is no stranger to these extreme weather events that in the past have left thousands without power, caused millions in damages and even claimed lives.


Hurricane Fiona is the next storm that has the potential to be a landmark event in Canada, according to Environment Canada meteorologist Jim Prime.


“One thing we usually say in the Canadian Hurricane Centre is it only takes one storm to really have a bad season and here we are: the first major hurricane of the season and it’s going to be coming to Atlantic Canada,” Prime told CTVNews.ca in an interview on Thursday.


Prime said every storm recorded throughout history is different and can impact regions that haven’t been affected before, which is why it’s important for residents to stay alert and prepared.


Here is a look at some previous major hurricanes that have made landfall in Canada and their impact.


Known as Canada’s deadliest hurricane to this day, the hurricane of 1775 left more than 4,000 people dead as it swept over the then-British colony of Newfoundland on Sept. 9, 247 years ago.


The Category 4 hurricane claimed the lives of mostly sailors at sea, sinking several fishing boats and two British naval vessels, according to the National Oceanic Atmospheric Administration (NOAA). There were also reports of the rise in water levels reaching land between 6.5 and 10 metres high.


Parts of eastern Canada faced the destruction of the Galveston Hurricane that began its track from Cuba as a tropical storm and became a Category 4 hurricane by the time it made landfall in Galveston, Texas. On Sept. 11, 1900 it became an extratropical cyclone as it made its way through the Great Lakes and southeastern Canada where an estimated 52 to 232 lives were lost, according to Environment Canada.


In the epicentre, it is reported the tides reached up to 4.5 metres and more than 8,000 people were killed in the U.S., marking the deadliest weather disaster in U.S. history.


One of the oldest hurricanes still remembered today is Hurricane Hazel, which struck Southern Ontario on Oct. 5, 1954. The impact of Hazel was strongly felt as winds of up to 110 km/h and 85 mm of rain washed out homes, streets, and bridges.


The Category 4 hurricane made its way from the Caribbean, up to the middle of the Atlantic states before it became a Category 1 hurricane as it reached the Toronto region. Nonetheless its powerful impact at the time left 81 people dead, thousands homeless and reportedly caused an estimated $100 million in destruction.


A major hurricane returned to the Maritimes in the form of Hurricane Juan on Sept. 29, 2003. The Category 2 storm made landfall in Nova Scotia before moving onto Prince Edward Island as a marginal hurricane, according to Environment Canada. The average wind speeds reached 158 km/h and 25-40 mm of rainfall was reported in the Halifax region.


Eight people were killed in Canada and an estimated 50-100 millions trees came down in Nova Scotia within two hours. Hundreds of people in both provinces lost power and in Nova Scotia residents were left in the dark for nearly two weeks.


On Sept. 20, 2010, Hurricane Igor brushed past Bermuda before it was tracked to go offshore Canada’s Avalon Peninsula, where it unexpectedly continued to move further north reaching eastern Newfoundland.


The storm recorded winds reaching up to 140 km/h and at one point 172 km/h in Cape Pine in southeastern N.L. Several of the regions reported an average of 150 mm of rainfall leaving more than 150 communities flooded and 70,000 residents without power. There was also one reported death, a person who washed away in the floods.


One of the more recent weather disasters in Canada was Category 2 hurricane Dorian, which made landfall in Atlantic Canada on Sept. 7, 2019.


The storm wreaked havoc as a Category 5 hurricane in the Bahamas before it became a post-tropical cyclone when it reached the maritime provinces and even parts of Quebec, according to the NOAA. The wind speeds were estimated at 155 km/h and the Insurance Bureau of Canada reported over $105 million in insured damage, most of which was reported by the hardest-hit province of Nova Scotia.


Prime said Hurricane Fiona has a similar trajectory to Dorian, which “had really strong winds, heavy rainfall and impacted New Brunswick, Nova Scotia, P.E.I. and Newfoundland, which is what’s going to happen with this system as well.”