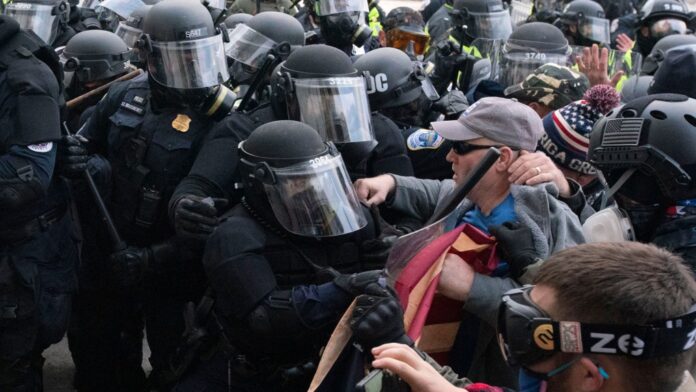 
Timothy Hale-Cusanelli, an ex-Army reservist and U.S. Capitol rioter who said January 6, 2021, was “exhilarating” and felt like “civil war” was sentenced on Thursday to four years behind bars.


“This is a significant sentence,” District Judge Trevor McFadden said. McFadden lambasted Hale-Cusanelli for his “sexist, racist and antisemitic comments” that the judge said motivated, in part, his actions that day.


Hale-Cusanelli, who was convicted in May of all five charges he faced, including the felony of obstructing an official proceeding, told the judge he “would never see my face again.”


“I disrespected my uniform” on January 6, Hale-Cusanelli added, asking the judge for mercy. He also was sentenced to three years of supervised release and ordered to pay $2,000 in restitution.


During the riot, video shows Hale-Cusanelli yelling for the mob to “advance” before breaching the US Capitol himself, and later signaling for more rioters to join him inside. Hale-Cusanelli also tried to pull another rioter away from a police officer who was detaining the individual.


“You absolutely knew what you and others were doing,” McFadden said Thursday, adding that Hale-Cusanelli lied during his testimony in trial when he claimed he didn’t know Congress met in the Capitol, despite telling his roommate that he was just outside the House chambers during the riot.


McFadden repeatedly castigated Hale-Cusanelli for racist commentary that “normalizes violence,” pointing to the recent increase of antisemitic violence in the US.


In their sentencing memorandum, prosecutors argued that Hale-Cusanelli should receive 78 months behind bars and pointed to his desire for a civil war and antisemitic conspiracies, saying that Jews controlled Democrats, President Joe Biden and all of government.


“It is well-established in the record at this point that Hale-Cusanelli subscribes to White Supremacist and Nazi-Sympathizer ideologies that drive his enthusiasm for another civil war and formed the basis of this Court’s pretrial determination that Hale-Cusanelli was a danger to the community,” prosecutor Kathryn Fifield wrote.


“What Hale-Cusanelli was doing on January 6 was not activism,” Fifield added. “It was the preamble to his civil war.”


During his trial, Hale-Cusanelli’s defense attorney Jonathan Crisp told the jury that his client simply says these things to “agitate” others and “get attention.” Hale-Cusanelli testified that he was half Jewish and not an anti-Semite.


In his sentencing memorandum, another attorney for Hale-Cusanelli, Nicholas Smith, wrote that his client’s “upbringing was like something from Oliver Twist” and that he was raised by “effectively career criminals” and drug abusers. Smith, in his filing, asked that Hale-Cusanelli be sentenced to 20 months in prison with time served.


Stephen Ayres, who testified at one of the House select committee‘s public hearings, was sentenced Thursday to two years of probation and 100 hours of community service.


Ayres had pleaded guilty to one count of disorderly conduct in a restricted building in June and the government asked for two months’ incarceration at sentencing.


District Judge John Bates at sentencing credited Ayres’ testimony while deciding his sentence, saying that Ayres “has shown genuine remorse and regret and that includes testifying before the January 6th select committee.”


“I want to apologize to you and the court and the American people,” Ayres said during his sentencing hearing. “I went down there that day not with the intention to cause any violence or anything like that, but I did get caught up in all the stuff online, on Facebook, which ultimately I felt like was steering me in the wrong direction.”


During the hearing in July, Ayres testified that he was “riled up” by then-President Donald Trump’s speech and never planned to go to the Capitol but was “following what (Trump) said” during his Ellipse address.


“It changed my life, not for the good, definitely not for the better,” he said. He added that he no longer believes Trump’s lies about the 2020 election but warned that there are millions of people who still do, which poses a threat for future elections.

Spring in Canada will be a ‘temperature roller-coaster’ this year