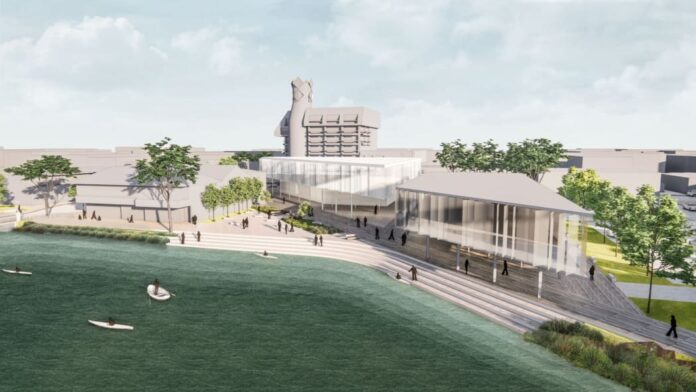 New flood modelling shows the roads around a proposed $46 million riverside library for Nelson will need to be raised in order for people to access it in the future.

The updated plan shows the central business district will be more widely affected by rising sea levels sooner than previously thought, raising issues about how people will access the city and the riverside library.

While the updated baseline river flood level was “virtually indistinguishable” from that in the September 2021 plan, the new plan showed flood levels from coastal inundation for the inner city in 2130 would increase by around 300mm, taking the sea level rise prediction under the RCP8.5M scenario to 1.48 metres.

Louverdis said they can and would design the library for “anything nature may throw at us”, namely river flooding and coastal inundation, through an adjustable floor level and secondary flow paths within the development.

The proposed library would need a floor level of 4.3 metres due to the predicted increase in coastal inundation.

But access to the proposed site, the Maitai Precinct and existing inner city buildings would be more challenging.

The new data showed to stay ahead of coastal inundation over time, road levels around the Trafalgar/Halifax intersection would need to be raised by around 800mm to provide reasonable security of access at 2130.

“As engineers we were always aware and had openly noted that over time we would have to look at what that meant for the city.

“We just need to have a little bit more time to think about what that means, not only for the library but access to buildings and infrastructure in the CBD.”

Louverdis said staff needed to do substantial more work on the flood modelling to understand the impacts of raising road levels across a wider area in the inner city and The Wood, then report that analysis to council.

A first stage geotechnical report found the site was susceptible to liquefaction of up to nine metres deep in a moderate to strong earthquake but Louverdis said there were foundation options that would mitigate that.

“There’s nothing in there that’s a fatal flaw, there’s many sites around the country that have ground conditions that are susceptible to liquefaction and that is just part of the due diligence.”

The proposed site for the new library is owned by the Wakatū Incorporation and the report to council recommended deferring land negotiations until there was a better understanding of the coastal inundation impacts on the inner city.

Woman ‘Tricked’ to Believe She Was a D.E.A. Agent Trainee, Official...