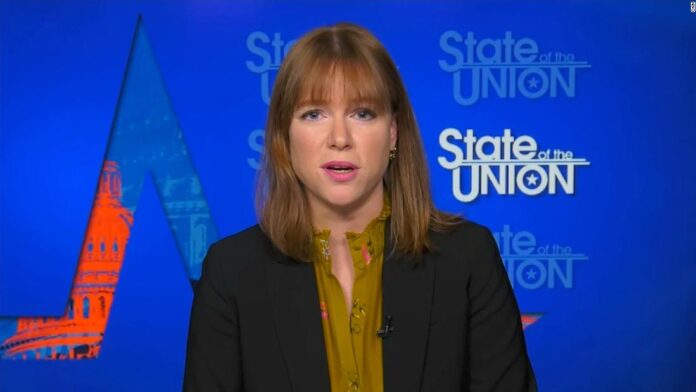 “Without Kate Bedingfield’s talent and tenacity, Donald Trump might still be in the White House, the Rescue Plan and the Infrastructure Law might still be unrealized goals, and Kentaji Brown Jackson might not be sitting on the Supreme Court,” Klain said in a statement. “She has played a huge role in everything the President has achieved — from his second term as Vice President, through the campaign, and since coming to the White House.

“Her strategic acumen, intense devotion to the President’s agenda, and fierce work on his behalf are unmatched. She will continue to remain a critical player in moving the Biden agenda forward from the outside.”

“From long before we launched the campaign, Kate Bedingfield was a fierce defender of the President and ensured that our message in 2020 and in the White House was consistent with his voice and principles,” said Anita Dunn, a top Biden adviser. “Her leadership helped us tell the story about the fight Joe Biden is making for the working families of America. She’ll always be a core member of this family, even as she takes a little time to put her own family first.”

A person widely seen as Bedingfield’s likely replacement is Liz Allen, another longtime Biden loyalist who worked for him when he was vice president and was also deputy communications director for former President Barack Obama. She was also tasked with working with Kamala Harris after Harris was chosen to be Biden’s vice presidential running mate. She is currently working at the State Department.

But it is not clear that a decision on Bedingfield’s successor has been made yet.

Bedingfield’s departure is the latest change within his inner circle as the President looks to solidify his team ahead of the midterms. Long-time adviser Dunn recently returned to the West Wing full time and a number of mid-level aides have also moved to more high-profile jobs in the administration.

The staffing changes come as the White House grapples with soaring inflation, a war in Ukraine and the President’s low approval ratings — all as House and Senate Republicans eye pathways to win back majority control in the November elections.

Bedingfield has worked in various political roles spanning the past decade and she has a long-standing working relationship with Biden. She worked with him in Obama’s White House as deputy director of media affairs and director of response.

She was regarded as a key figure in Biden’s 2020 presidential campaign, serving as deputy campaign manager and communications director.

She previously worked at the Motion Picture Association of America, where she was the vice president of corporate communications. Bedingfield was also the spokeswoman for John Edwards’ 2008 presidential campaign, and the communications director for Sen. Jeanne Shaheen’s 2008 Senate campaign in New Hampshire.

This story has been updated with additional details.

Images: Tanks, helicopters, artillery: See what the U.S. left behind in...