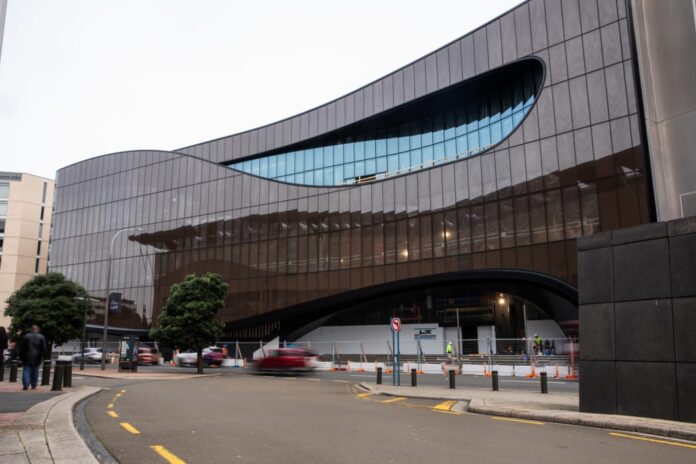 It was once a bland, boring carpark but now in its place is a new building with its look inspired by the wild winds of Wellington.

The capital city’s new convention centre Tākina is well on the way to being finished.

A lot has changed on this site across the road from Te Papa on Cable St since construction started in September 2019.

Project director Danny McComb remembered what it had been like.

“It was basically a gravel carpark, with a couple of old, derelict buildings on it, small scale buildings and then a small Thrifty Car rental place. Effectively it had been that way for many many decades really.”

He was now excited about what was coming.

“There’ll be an activity, there’ll be a buzz about the centre that is provided, just because of the volume of things that are happening here.”

There will be three levels – starting on the ground floor with a cafe, retail and and gallery space.

The first floor will have large conference and exhibition space and the top floor an even larger conference space.

The entire site can hold more than 5000 people at once and is spread over 930 square metres. The largest space can hold 1600 people.

But McComb said it may not be quite like the new convention centres in Auckland or Christchurch – for example, there would be no auditorium.

“We have nowhere near the level of investment that Christchurch and Auckland have got going into theirs. So we’ve had to be a lot cleverer in terms of making sure we utilise the space and the spaces are flexible.”

The exhibition areas will hold the likes of big family events about movies or entertainment – a bit different from Te Papa over the road.

David Perks, the general manager of commercial development for Tākina, said many events were on the horizon.

“So in that first year we’ve got 44 conferences booked in and they’re from every part of the business, societal, environmental spectrum.”

LT McGuinness is the lead contractor on the project.

Its commercial manager Jack McGuinness said despite some Covid-19 delays, they had tried to work hard.

“Every construction site in New Zealand has been impacted by Covid and we definitely have been as well. But we’ve just been versatile and we’ve just adapted and tried to just plan and restrategise when we’ve had disruptions.”

The envelope or outside of the building is nearly done.

Contractors are working on the fitout and have got some landscaping to do.

The first official events are due to be held in June next year, with some test events held in May.

On the heart beat with chickpea phosphorus acquisition

Residential colleges: What we find out about their historical past and...