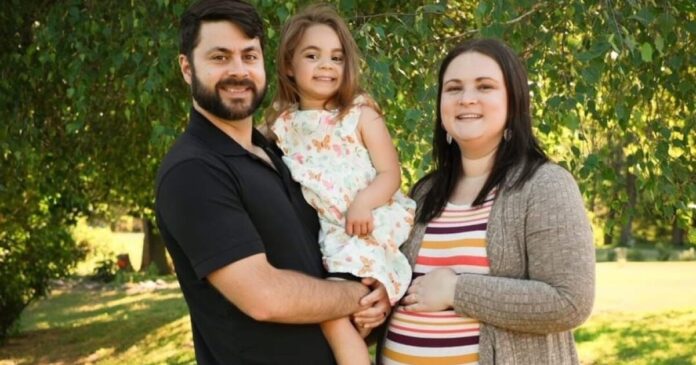 ALLEGAN COUNTY, Mich — Amanda Goulet was in “complete shock” to learn she was expecting earlier this year.

“That was a very big miracle and blessing that we did not expect,” she told FOX 17 News. “The emotions were loaded. My husband was super excited. I was very concerned. And hopeful.”

Goulet was also worried that her body might attack her baby.

Due to a number of autoimmune conditions, the young mom previously suffered three losses before learning her immune system was the issue.

She would go on to have a healthy baby girl, thanks to the help of an infusion treatment used to calm her immune system called intravenous immunoglobulin or IVIG.

Now expecting a baby boy in November, Goulet knew IVIG would have to be a major part of sustaining the pregnancy again.

“Having the lupus diagnosis thrown in there and having some clotting and bleeding issues thrown into there, it makes it so much more of a complicated issue,” she explained.

Goulet’s team of doctors, including a reproductive immunologist in Chicago, and Dr. Martin Dubravec, an allergist immunologist based in Cadillac, Michigan, agree the treatment is best in Goulet’s case.

“It’s not officially FDA recognized as a treatment for this patient in her pregnancy,” said Dr. Dubravec. “But, there’s clear scientific evidence, many case reports and her own experience that this medicine has been of benefit for her, in allowing her to maintain her pregnancy to term.”

He continued, “It is a life and death situation for her. And we can’t experiment with, well, let’s try this instead, let’s do this instead. She already has a track record of what has worked.”

“The reason they’re saying no to it is because my platelet levels aren’t low enough to be in their parameters of what they want,” she said. “My doctors say in order for them to be low enough, baby and I would both be in jeopardy. So it’s a double edged sword. I can’t meet the criteria because I can’t meet the criteria… my body would go into preservation mode to save me. And it would sacrifice the baby.”

Goulet has turned to online fundraising to pay for the treatments so far, but still has at least seven left to go.

FOX 17 reached out to Blue Cross Blue Shield of Michigan and received this statement:

Blue Cross members can appeal a decision that they disagree with, and this can include an independent review by a physician not associated with us. While we cannot comment on this case due to privacy laws, in general our reviews take into consideration of whether a treatment is indicated for a condition.

Goulet said she has already submitted two appeals- both have been denied.

Now past the halfway point of her pregnancy, Goulet is hopeful she will continue to have a healthy pregnancy, despite the challenges.

A GoFundMe page has been set up to help the family with the cost of treatment.

You can also donate directly to Infusion Associates on Goulet’s behalf using the info below:

Editorial: Election night results are a thing of the past

‘I will Defend You’: Buyer Helps Cease Harrowing Theft Caught On...