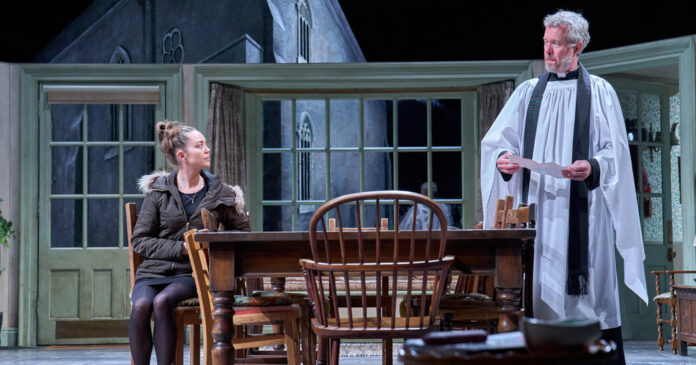 LONDON — Families are having a hard time on the London stage of late, and in one instance, at least, balloons are partly to blame. That’s the unusual starting point of “The Southbury Child,” a lively if uneven new play from Stephen Beresford that has arrived at the Bridge Theater (through Aug. 27) after its premiere south of London last month at the Chichester Festival Theater.

A young girl, Taylor Southbury, has died of a fast-spreading illness, and the local vicar, David Highland (Alex Jennings, in a galvanic star turn), is preparing for her funeral. The girl’s bereft mother, Tina (Sarah Twomey), has requested that her daughter’s memory be honored with helium balloons affixed throughout the church, bearing images of the Disney princesses the child so loved.

David, though, rebuffs this idea. “This is not just a question of taste — of mere aesthetics,” he tells his wife, Mary (Phoebe Nicholls), as the townspeople in his Dartmouth constituency gather in support of Tina’s wishes. What matters most when it comes to grieving Taylor, the vicar says around the capacious kitchen table that dominates Mark Thompson’s set, is “an experience worthy of God” that looks at death head-on. That means rejecting embellishments like balloons — branded by Disney no less — that aren’t focused on spiritual priorities like salvation.

David, we soon discover, is far from flawless and may not be ideally positioned to adjudicate behavior and protocol in others. A philanderer with a fondness for drink, he threatens to rupture his family no less fully than he upends a congregation whose mounting disapproval — “justice for Taylor” becomes their mantra — can be heard during the scene changes. (The exemplary sound design is by George Dennis.)

The play wastes no time spelling out the inconsistencies in David’s sentiments: “You’re not exactly the poster boy for unshakable principles,” counters Craig (a likable Jack Greenlees), the gay Scottish curate new in town who, rather too conveniently, has fought his own battle with booze.

Adding to the increasingly vexed crosscurrents are the dead girl’s sweary uncle, Lee (Josh Finan), whose actions in the second act send a genuine shiver through the house, and the Highlands’ grown daughters, Susannah (Jo Herbert) and Naomi (a vivid Racheal Ofori), the first as prim and indrawn a personality as her younger, adopted sibling is a free spirit with a fondness for weed.

Beresford wrote one of the defining plays of lockdown in his terrific solo piece, “Three Kings,” as a showcase for Andrew Scott, and here you sense the playwright’s delight at being able to populate a stage anew.

Ambitious in its thematic reach, “The Southbury Child” suggests itself as a bustling state-of-the-nation play, which wastes no time referring to societal divisions, unemployment and the reality of Brexit. It also has plenty to say about the climate of cancel culture that threatens to engulf David via mob rule. Nicholas Hytner’s characteristically adroit production is on firmest footing when the play is at its most serious, and when Jennings’s bespectacled David puts his flippancy to one side to make way for genuine anguish.

Hytner and Jennings have worked together on and off now for several decades, and their latest collaboration owes an incalculable amount to Jennings’s ability to do wry one minute and to tap the wellsprings of emotion the next.

Elsewhere, you slightly tire of the script’s more glib moments: Waitrose, the upmarket British grocery store, is co-opted for a punchline, and there’s a light bulb joke that I could swear I’ve heard before.

It seems odd, too, that a disgraced David cedes center stage near the end to the stricken Lee, whom the able Finan plays with a gathering despair that ends the proceedings on an intriguingly open-ended note. For all the breeziness of a play that likes its gags, “The Southbury Child” comes steeped in a degree of pain that even the best sermon might find hard to assuage.

As for the calamity-prone clan in Theresa Rebeck’s “Mad House,” now in its world premiere at the Ambassadors Theater, through Sept. 4, what can I say beyond noting that I didn’t believe a single word of the fractiousness on view?

The synthetic feeling of Moritz von Stuelpnagel’s production is especially surprising following reports that Rebeck, the American author of such accomplished Broadway plays as “Seminar” and “Bernhardt/Hamlet,” wrote the play very much with its leading man, the TV star and stage actor David Harbour, in mind — specifically drawing upon mental health issues that Harbour has confronted in the past.

It would help if the situation — a dying father (Bill Pullman) facing down his three children, Harbour’s emotionally wayward Michael chief among them — didn’t seem to owe such an obvious debt to plays like “August: Osage County,” albeit with the genders reversed, not to mention earlier studies in familial discord like Arthur Miller’s “The Price.” Pullman’s irascible Daniel roars his way to the grave via a series of standoffs that depend on hoary narrative devices like a revelatory letter and baldfaced pronouncements on the groan-worthy order of “None of us had a childhood.”

That particular remark is spoken by the widower’s toxic daughter, Pam (Sinéad Matthews), who is the last of the children to gather at the chaotic family home for a rancorous reckoning that finds room, too, for a hospice nurse played by the wonderful Akiya Henry, an Olivier Award nominee this year for her performance in the Almeida Theater’s “Macbeth.”

Henry’s character, patronizingly conceived in saintly terms, gets a breakdown moment that is better acted than the writing deserves, and her dismissal of “this ridiculous country” (meaning the United States) seems calculated to strike a chord with British audiences. It’s always good to see Pullman onstage, and Harbour’s conviction in a part that is presumably close to the knuckle exists beyond any doubt.

But I’m still pondering the crucial narrative role of a pencil sharpener, which all too readily happens to be found outside a back door, ready for use. Playgoers, take note: You never know when a writing implement might become a matter of life and death.

Ukraine’s Herculean Task: Helping Millions Whose Homes Are in Ruins or Russia’s Hands

As battle for Kyiv rages, Ukraine’s president tries to rally his...

‘It felt like a wedding,’ says a refugee Francis brought to...