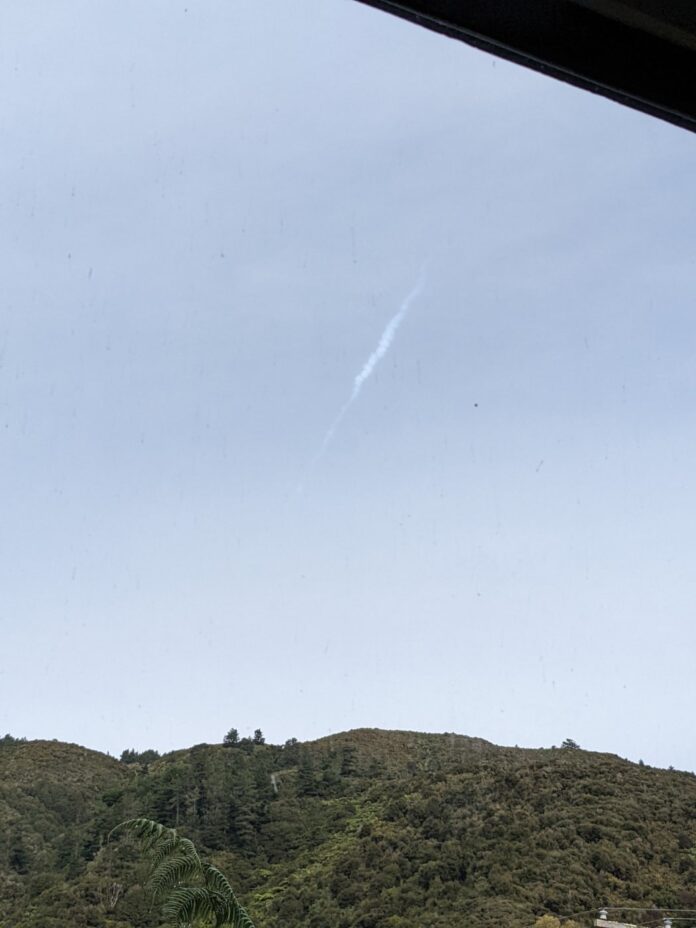 A large meteor sighted across the lower North Island comes 23 years ago to the day of the country’s last significant meteor.

Just before 2pm this afternoon a meteor, that’s thought to be up to 1 meter wide, was sighted in parts of the lower North Island.

Palmerston North local Sue saw it flash through the sky.

“It was kind of like a big shooting star, it had a blue tail on it and it looked to me like it was about a metre long,” she said.

Footage shows the large bright ball of light briefly shooting through the sky at a fast speed.

What looked like a tail of smoke was actually ‘dust’ of the meteor that had vaporised and could be seen hanging around the air space for a time afterwards.

Big bangs, loud or faint rumbling were heard between Masterton and Wellington but not everyone heard a sound.

This photo of the meteor was taken looking directly south in the Hutt Valley. An eyewitness says there was a huge flash of light as it combusted and disintegrated.
Photo: Supplied

Police received a number of calls about the meteor but none reporting damage or that it had landed.

On this day 23 years ago a fireball crossed over Taranaki but was seen and heard as far south as Timaru and north as Ninety Mile Beach.

Today’s meteor appeared to have been slightly smaller but nonetheless notable.

An interesting signature from the Wellington Radar, at 1:52pm.

This shows a cross-section of the atmosphere, with what may be the smoke trail of the meteor ☄ that passed over the lower North Island.

It’s about the right place and time, and it’s not meteorological. pic.twitter.com/2pY3WqzenT

Otago Museum director Ian Griffin said seeing a meteor was quite a rare event but today it came at a time of one valuable tool – technology.

“What’s really exciting about this is that we live in an era where people have recorded it on dashcams or security cameras at home,” Griffin said.

“If we get that footage we may potentially be able to figure out the path of the object throughout the sky and possibly, if it survived its fall, to figure out where it landed.”

He said those who did not capture the event on camera could still help investigate.

“If you saw it and heard a bang, that’s quite interesting too. If you know the time between when you saw the flash of light heard the bang that gives us a sense of distance.”

Space specialist Duncan Steel had only seen one daytime meteor.

“[Meteors] are due to macrometeoroids in the atmosphere coming in very quickly, typically 30km per second. To be seen during the daytime it would need to be quite large, something the size of a rugby ball or bigger – that’s what makes them rare,” Steel said.

He said it would be “very unusual” for the meteor to have made impact on the earth’s surface – instead he believed it was very like the space rock vaporised.

But the meteor’s dust would still technically fall down to the ground – Steel said meteor dust was everywhere.

“You just need to swipe your fingers across the mantelpiece, because typically one in 1000 dust particles in a house are micro meteorites”

Kids need time to adapt to sleeping during daylight saving –...