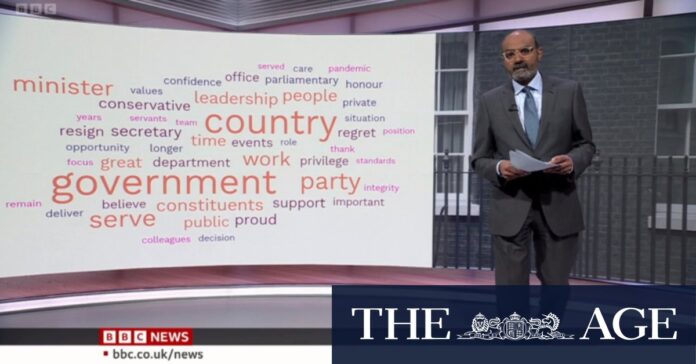 Over the past few days UK politics has been consumed by a political crisis over Prime Minister Boris Johnson’s leadership. Sparked by the resignations of Health Minister Sajid Javid and Chancellor Rishi Sunak, more than 40 MPs have since quit, putting enormous pressure on Johnson, who few expect to survive much longer.

While Australians have become accustomed to leadership spills and parliamentary chaos, it’s a slightly less common affair in the UK. But, thankfully, the British media has demonstrated it’s up the task of covering the drama moment by moment.

From rolling lists of resignations to interviewing cats and holding live pigs on TV, British news outlets are going all out to cover what could be the last days of the Johnson prime ministership.

Amid the non-stop coverage, TV news producers quickly stumbled upon a problem: with so many of Johnson’s ministers resigning in a single day, how were they to report on all of them? Enter the resignation tracker.

In the top left of the screen on Sky News, the counter ticked up every time someone resigned, and it was a smart move – it didn’t take up too much real estate but clearly communicated to audiences every departure. Over 24 hours, the number kept growing.

A minute-long montage of every resignation

The BBC’s flagship evening news broadcast, Newsnight, decided to ditch the regular credits at the end of its program and instead spend a full minute listing every resignation. It was matched by a truly perfect cover of the go-to soundtrack for big moments in television news: The Verve’s Bitter Sweet Symphony.