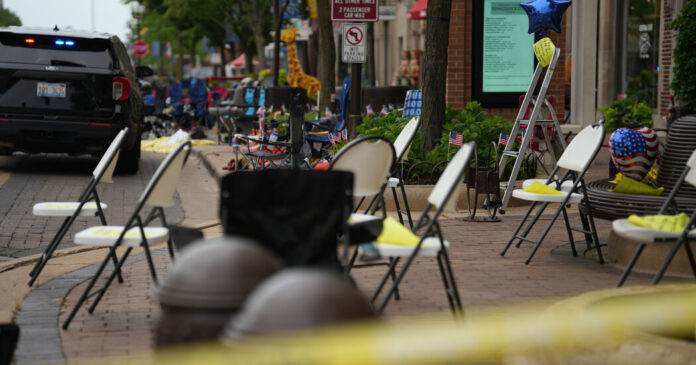 HIGHLAND PARK, Ill. — On Monday morning, Julie Morrison, an Illinois state senator, was sitting in the back of a convertible, waving to Fourth of July paradegoers, her grandchildren walking alongside the car. Ms. Morrison, a Democrat, had made combating gun violence a priority in her legislative career, and had been the chief sponsor of the state’s “red flag” law, which set up a system in which guns can be taken from someone found to be dangerous.

Then gunfire broke out.

Ms. Morrison found herself running for safety and later asking how a mass shooting had occurred in a place with some of the strongest gun ordinances in the country. “Are there loopholes?” Ms. Morrison asked on Wednesday. “Unfortunately, we now have an opportunity to look at that.”

The suspect in the shooting, Robert E. Crimo III, 21, had drawn police attention more than once, and despite warnings about his troubling behavior, had gotten a firearm license and bought several guns.

How a young man who had sent troubling signals managed to end up with a semiautomatic rifle in Illinois is a question that is haunting not only the survivors of Monday’s deadly massacre in Highland Park, a Chicago suburb. It is also a question of federal importance, coming just days after President Biden signed into law the most significant gun legislation passed in decades.

As details of Mr. Crimo’s past continued to emerge, and as a judge ordered him held without bail on murder charges on Wednesday, it remained unclear whether the horrific episode revealed weaknesses in state restrictions on guns, or in the limits of even potent safeguards in a system that ultimately relies on the judgments of people — the authorities, families, observers.

Ms. Morrison acknowledged that the effectiveness of certain gun laws was often limited by how people responded to them, including whether people informed the authorities of friends or family members who were exhibiting alarming behavior. “I don’t know how much we can legislate human response; we can only provide the tools,” she said.

In an initial court appearance on Wednesday, where Mr. Crimo appeared by video, Ben Dillon, a prosecutor, described in the fullest detail yet how officials say the attack unfolded on Monday.

Mr. Dillon said Mr. Crimo used a fire escape to climb onto a rooftop in the city’s downtown during the holiday parade. There, Mr. Dillon said, he opened fire — emptying a 30-round magazine, firing from another, then inserting a third magazine. Officials recovered 83 bullet casings, Mr. Dillon said.

For hours after the shooting, which resulted in seven deaths, the authorities searched for the suspect. Deputy Chief Christopher Covelli of the Lake County Sheriff’s Office said investigators believed that he fled to Madison, Wis., after the attack but then returned to Illinois, where he was arrested. Chief Covelli said the police believed that Mr. Crimo saw a holiday celebration in Madison and considered using a second rifle he had with him in the car to carry out another shooting there, but decided against it.

In an Illinois State Police news conference on Wednesday, officials defended how they handled Mr. Crimo’s application for a gun license, and released records showing that he had told Highland Park officers in 2019 that he had been depressed and used drugs.

Under Illinois law, there are several opportunities for the authorities to intervene if a gun owner is deemed to pose a dangerous risk. This begins with the application process for a gun license, known in Illinois as a Firearm Owner’s Identification card.

The application includes a long list of questions about past felony convictions, failed drug tests or recent hospitalizations for mental illness. It is submitted to the State Police, where it goes through dozens of steps, involving electronic and manual checks of national and state databases. At any point in that process, the state could determine that a person is not eligible. However, a vast majority are approved; according to a 2021 report by the Illinois auditor general, fewer than 4 percent of nearly 600,000 applications were denied in 2018 and 2019.

Brendan Kelly, the Illinois State Police director, said on Wednesday he believed that his agency acted correctly when handling information about Mr. Crimo. It did not have information that would have allowed the agency to deny him the license to own a gun, Mr. Kelly said.

The law governing licenses empowers local authorities such as the police or school officials to file a report to the Illinois State Police indicating that a person might present a “clear and present danger.” The State Police can then decide whether the report meets the burden to revoke that person’s card.

The Highland Park police had filed a “clear and present danger” report about Mr. Crimo in September 2019 after seizing 16 knives, a dagger and a sword from his home while responding to reports that he had been making threats. According to the State Police, his father told officers that he owned the knives, and they were all returned the same day. It was the second time that year the police responded to reports about Mr. Crimo’s behavior; the first involved a report of an attempted suicide.

But Mr. Kelly, the State Police director, said the Highland Park report did not clear the legal threshold to determine that Mr. Crimo, who denied to officers that he wanted to hurt himself or others, was a clear and present danger.

Mr. Kelly said that how well gun laws work rested not only on law enforcement, but on the vigilance and follow-through of family members and friends.

Under the policies in place at that time, Mr. Kelly said the state would not still have had a copy of that report from the Highland Park police when Mr. Crimo sought a Firearm Owner’s Identification card three months later with the sponsorship of his father. He had no disqualifying convictions, no restraining orders, no psychiatric admissions, no “clear and present danger” designations when he sought permission to own guns. He was approved.

By the end of 2020, he had bought several guns, including the Smith & Wesson semiautomatic rifle that police say was used in Monday’s attack and another rifle found in his car when he was arrested.

Officials have not said what they thought might have motivated the attack, but have said they did not have any reason to believe that it was driven by racial or religious hate.

Some in Highland Park’s large Jewish community said they recognized the accused man. Martin Blumenthal, who is in charge of security at the city’s North Suburban Lubavitch Chabad synagogue, said he recalled the man from a Passover service this year.

He said he was now convinced that the man went to the synagogue to study it as a potential target. “He was definitely casing the place out,” Mr. Blumenthal said.

Prosecutors declined to say on Wednesday whether they were considering charges against any members of the suspect’s family. Steven Greenberg, a lawyer representing the father, acknowledged that his client had sponsored his son’s gun license application but said the father did not believe there was an issue, and might not have fully understood what happened during the police visit in 2019 when officers seized knives from his son.

The filing of a “clear and present danger” report was not the only point over the past three years when the suspect’s intention to buy and carry a gun might have been thwarted.

In 2019, the state’s Firearms Restraining Order Act, the legislation sponsored by Ms. Morrison and often referred to as a red flag law, went into effect, allowing the police to seize firearms if a judge determines that the owner of the guns “poses an immediate and present danger of causing personal injury to himself, herself or another.” Speak for Safety Illinois, an advocacy group, found that only 53 firearm restraining orders were filed in the first two years of the law, nearly half of them in a single suburban Chicago county.

There is no indication that a firearm restraining order was ever sought in Mr. Crimo’s case, despite his troubling behavior. This presents one of the difficult realities of legislating for public safety: Red flag laws only come into play when someone who is close to a potentially dangerous gun owner seeks an order.

“This was a textbook case of a red flag law that was not used,” said John Feinblatt, president of Everytown for Gun Safety, which has called for more restrictive gun laws. “The tool to invoke a red flag law existed and nobody took the tool out of the box.”

Democrats moved quickly to clear the way for votes on legislation...