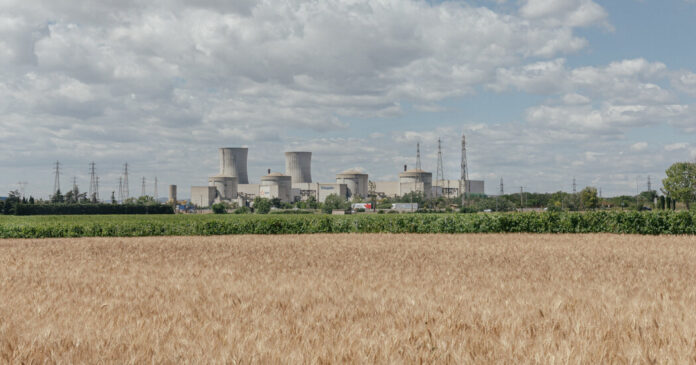 PARIS — France said on Wednesday that it would renationalize its state-backed electricity giant to help ensure the country’s energy sovereignty as Europe faces a worsening energy crisis from Russia’s war in Ukraine.

The move would give the government more control to fix a swirling storm of problems that have plagued France’s nuclear energy program, the biggest in Europe, at a time when President Emmanuel Macron has pledged to blunt the pain of increasing living costs by shielding consumers from soaring energy prices.

Élisabeth Borne, the French prime minister, told lawmakers on Wednesday for her first major speech before Parliament that the shift was needed to ensure France’s energy independence while also meeting a major goal of combating climate change.

Though France gets about 70 percent of its electricity from nuclear power, a bigger share than any other country in the world, Ms. Borne said it could also no longer count on Russian oil and gas.

The government must ensure its energy sovereignty by holding 100 percent of the capital in the company, Électricité de France, or EDF, she said, up from 84 percent currently. The company is France’s main electricity producer and operates all of its nuclear plants.

Economic interventionism by the government is a strong tradition in France, even as it has mostly moved away from the sweeping nationalizations of the 1980s under François Mitterrand, the Socialist president at the time.

Still, the step was a symbolic one for President Emmanuel Macron. A former investment banker, he had been elected in 2017 on an avowedly pro-business platform that promised to cut regulation and reduce government spending. But it did not take long for him to follow in his predecessors’ footsteps.

In 2017, his government nationalized France’s largest shipyard, STX France, to prevent an Italian competitor from taking over. More recently, the Covid-19 pandemic and the conflict between Russia and Ukraine have accelerated his pivot from free-market reformer to state intervention advocate.

Mr. Macron is now insistent that the government should champion economic and energy sovereignty to bolster France’s independence and to meet climate goals, including by regaining control of key national industries.

France is less dependent than European neighbors like Germany on Russian gas and oil. But to maintain that relative independence, upgrading the country’s aging nuclear reactors has become crucial for the government as the war in Ukraine has sent energy prices soaring, fueling inflation and making the cost of living one of the biggest concerns for French people.

Europe’s Shift Away From Fossil Fuels

The European Union has begun a transition to greener forms of energy. But financial and geopolitical considerations could complicate the efforts.

In February, Mr. Macron announced a 51.7 billion euro blueprint to overhaul France’s nuclear program that included plans for EDF to construct the first of up to 14 mammoth next-generation pressurized water reactors by 2035.

Élie Cohen, an economist who has studied the nuclear sector, said that “the only solution is nationalization” because “the government has chosen an energy mix centered on nuclear power, and because EDF is now compelled to build more reactors while it doesn’t have the resources to do so.”

The government had already hinted that it was considering renationalization. During his campaign for re-election, Mr. Macron had said at a news conference that he wanted to implement long-term energy plans that would entail “regaining capital control of several industrial players.”

EDF is one of France’s most prominent industrial giants. Last year, the company employed over 165,000 people and earned a revenue of about 85 billion euros, or about $86 billion.

But most of France’s nuclear infrastructure was built in the 1980s and has suffered from a lack of investment that came to a head in recent months with a mix of unexpected maintenance issues that have shut down around half of the country’s atomic reactors — the most in Europe — and sent France’s nuclear output tumbling to its lowest level in nearly 30 years.

The problems included a two-year backlog in required maintenance for dozens of aging reactors that was put off during coronavirus lockdowns; safety issues like corrosion and faulty welding seals on systems used to cool a reactor’s radioactive core; and rising spring and summer temperatures that have made it harder to cool reactors.

Mr. Cohen, who works at the CNRS, France’s national research organization, said that since its partial privatization in 2005, EDF had faced mounting industrial, financial and economic challenges.

In keeping with French and European competition rules, the company has been forced to sell power to smaller, third-party sellers at a price below its actual production costs and market prices.

The plan aimed to give fair access to nuclear energy and to make good on a political pledge to shield French households from rising energy prices, but it has proved punishing for EDF.

As recently as January, the government ordered EDF to sell more nuclear power to competitors in order to limit the increase of electricity prices in France, a measure that Bruno Le Maire, the finance minister, said would cost it up to 8.4 billion euros, or about $8.5 billion.

The government has also occasionally ordered EDF to cap its prices to keep market prices down, effectively squeezing the company’s margins, even as it is already 43 billion euros, about $45 billion, in debt.

“EDF could not behave like a normal company, seeking investments and normal profitability,” Mr. Cohen said.

Yves Marignac, a nuclear energy specialist at négaWatt, a research group in Paris, said the company “is no longer competitive under market conditions and no longer has financial resources.”

This bleak economic situation has made it impossible for EDF to respond to Mr. Macron’s ambitious plans for a wave of new-generation atomic reactors, in keeping with France’s goal to slash carbon emissions and cut its reliance on foreign energy.

“The renationalization simply reflects the fact that EDF is not in a position to invest in the maintenance of existing reactors and in the creation of new reactors on the scale of the projects announced by the president,” Mr. Marignac said.

“It signals the end of the illusion that nuclear power can blend into the private economy,” he added.

France created EDF in 1946, after World War II, by nationalizing and merging over 1,400 smaller electricity producers. It remained state-owned until 2005, when the company was partially privatized.

Although Ms. Borne did not specify whether the government would proceed with a nationalization bill or buy out minority shareholders, who currently hold a 14 percent stake in EDF, her speech suggested the latter. Employees of EDF hold the remaining one percent stake.

“This development will enable EDF to strengthen its capacity to carry out ambitious projects that are essential for our energy future as quickly as possible,” Ms. Borne said.

The French announcement came on the same day as European Union lawmakers voted in favor of considering some gas and nuclear energy projects as “green,” giving them access to cheap loans and even state subsidies — a change that France had lobbied for amid Europe’s growing push to wean itself off Russian oil and gas.

Inflation in the eurozone recently rose to a record 8.6 percent, as the fallout of the war in Ukraine and the economic conflict it has set off between Russia and Western Europe continued to drive up energy prices — although France’s inflation rate, at 6.5 percent, is comparatively lower than that of other European countries.

Mr. Macron’s newly appointed cabinet is expected to present a bill on Thursday that aims to help the French keep up with inflation by increasing several welfare benefits, capping rising rents, and creating subsidies for poorer households to buy essential food products.

Ukraine’s Herculean Task: Helping Millions Whose Homes Are in Ruins or Russia’s Hands