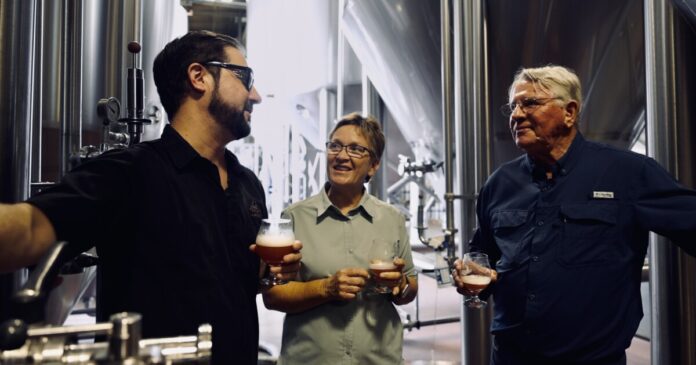 TAMPA, Fla. — Gene Altman and his wife Ann know what it means to support locals and grow delicious blackberries. Their dedication to their harvest and community is now getting the attention of craft breweries across the Tampa Bay area.

In the early 2000s, when Gene Altman decided to grow blackberries on the u-pick farm, he had no idea decades later that his berries would be the highly sought-after commodity they are today.

Blackberries aren’t the easiest fruit to grow in Florida’s warm climate. They need a certain amount of chill hours to produce fruit. But, Altman liked a challenge and knew growing blackberries in Florida was something he wanted to take on, no matter how difficult.

His hard work continues to pay off.

This year Coppertail Brewing Co. purchased 500 pounds of blackberries for their summer seasonal Florida Weisse. The beer is named Rubus, after the genus for blackberry, and made with Altman’s blackberries, raspberry, and lemon.

“I take a lot of pride in our property. I’ve always viewed a producer as the first environmentalist because we have to take care of the ground or the ground will not take care of us,” Altman said. “But, we’re fortunate that we can do a farm, not necessarily to table, but to the table, you’re going to have your beer sitting on. So, farm to the brewery, if you will.”

Married for more than 40 years, Gene and Ann make the perfect team. The couple operates Bramble Creek Farms with a deep love of the environment and the products they sell.

The piece of paradise in Hernando County is becoming a popular place to pick your own blackberries right off the vine. Other local brewers have approached Altman in the past but his first passion is taking care of his customers that visit the farm to pick their blackberries and shop in the country store run by Ann.

“They needed quite a few berries, and we couldn’t provide that in any one given day and still provide the public what we have been over the years,” Altman said. “I didn’t want to short-change my customers for new business — I won’t do that — so we picked them and froze them a little bit each time, and we got what they need.”

Once he had 500 pounds of frozen berries, the experts at Coppertail Brewing got to work.

“It really became apparent that we’re, we’re not really utilizing, you know, our local agricultural community,” Sam Swartz, the Director of Brewing Operations at Coppertail Brewing, told ABC Action News reporter Michael Paluska. “So, we tried to start focusing on sourcing, you know, whatever ingredient we can from local producers. Part of that’s been fun, but it’s also really challenging. You know, with Gene, we have 500 pounds of blackberries. And, you know, you can imagine squishing that up by hand is a little fun but also time-consuming.”

Swartz said they want their beer to stand out as unique and the freshest in our area, and using locally sourced products has been a hit.

“When we’re using fruits that are locally grown, it’s just vibrant, it’s fresh, versus when we’re using puree, it’s been processed. We feel like we lose the intensity and the freshness of the top of that fruit,” Swartz said. “With Gene, we’ve used some of his passion fruits before, you know, comparing his passion fruits into our sour beers versus, you know, the puree we can get from a provider outside of California and Mexico. It’s just night and day, night and day.”

We were with the Altman’s at Coppertail Brewing when they tried the beer-infused with their blackberries. Before it hit a keg or a can, the Altman’s were drinking it right out of the tank it was brewed in. Ann put her glass in first, Gene not far behind.

More partnerships with the Altman’s are already in the works.

“I know exactly the quality I’m getting from him,” Swartz said. “And also, you know, I’d rather give Gene money than you know somebody else that I don’t know, and Gene is a cool guy.”