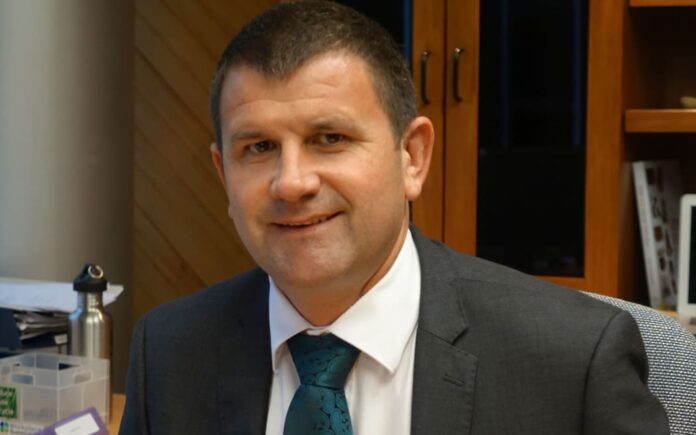 The mayor of New Plymouth’s failure to declare whether he intends standing for a third term is fuelling speculation he is after a job at one of the new three waters’ entities.

Neil Holdom said he will let the public know his plans later this month, but they have nothing to do with three waters.

Holdom likes to call himself the “infrastructure mayor”. The former journalist spent more than a decade working for lines company Powerco before securing the mayoral chains.

Alongside his civic duties, he runs a management consultancy providing advice on regulation, infrastructure strategy and business transformation.

He is a member of the Three Waters Steering Group, part of another working group looking at three waters governance, representation and accountability, and chair of the Entity B group of councils which includes Taranaki and stretches from Whanganui and Waikato across to the Bay of Plenty.

It is these commitments that have got tongues wagging – not least those of other mayoral aspirants such as Murray Chong.

“Well I know there was a gentleman that went into his office and asked him ‘look if you don’t think you’re getting a job for three waters can you put that in writing?’ and he refused to put it in writing, so maybe he’s just keeping his options open,” Chong said.

Fellow councillor Dinnie Moeahu who is also standing for mayor has heard the word on the street.

“The perception I keep getting, and again I don’t comment, but the perception within some sections of the community is that he’s already got a job lined up for three waters.

“The mayor has not indicated anything as such to us.”

Sam Bennett who is another keen on the mayoral chains said the fact that Holdom had not declared his candidacy has left people guessing.

“I think that’s causing a bit of confusion in the community about whether he’ll be standing for a third term to see the three waters through because of his involvement or will he not be standing and maybe he’s got something else he’d like to do.”

However, Bennett said he did not know what Holdom was planning because he had not told anybody.

Candidate nominations for the local body elections open next week and close on 12 August.

Holdom said he would let the public know his plans at the end of the month.

He was adamant they did not involve taking up a role with one of the three waters’ entities.

“So, I’m not interested in going to work in one of these water entities. You know my background. Look I’ve come in to do water within Taranaki and I think we’re doing a fantastic job in that, but my background is in the energy sector.”

Holdom believed the chatter about his future was down to the coming election.

“We have people who come up with various conspiracy theories but it’s just people looking to potentially develop their own political profiles and they’re welcome to do that. I just think it’s odd behaviour but it’s not unexpected.”

Holdom said the document he was asked to sign denying claims he was going to three waters was brought in by someone who had indicated they would be standing for the council, and it was not appropriate.

In New Plymouth most people thought it was time for the mayor to declare his hand.

“I think everyone has the right to know what he’s going to do,” said one shopper.

Another man, who preferred not to give his name, also believed it was time.

“What’s the point of hanging about? The elections aren’t too far away. People have the right to know what’s what, the sooner the better, and then they can do a bit of homework on it.”

And one man had even heard those stories about Holdom’s plans.

“He should be declaring his hand yes, but everyone knows he’s looking for a job on the three waters. That’s what the speculation is, that’s the word on the street.”

The local body elections will be held on 8 October.

Energy crisis: How long will it last and what happens if...

Digital currencies an opportunity but IMF warns of trust cost