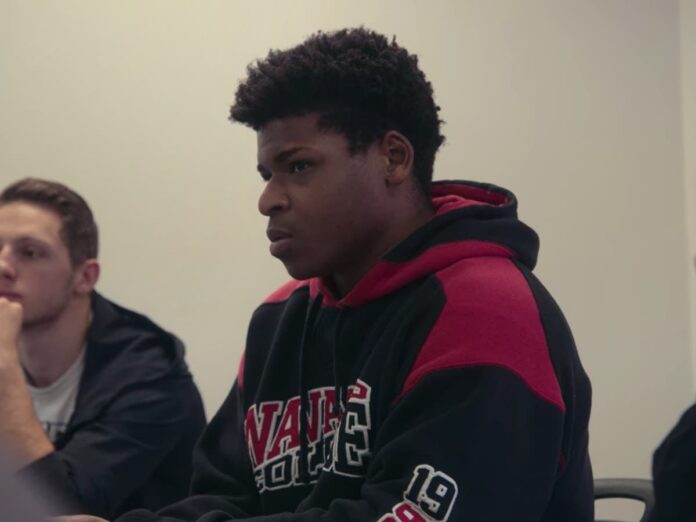 Jerry Harris has said he is “not an evil person” as he was sentenced to 12 years in jail for crimes relating to images of child sex abuse and soliciting sex from minors.

The star of Netflix’s Cheer apologised to his victims and said he was “still learning who I am” at the sentencing at a federal court in Chicago on Wednesday (6 July).

Prosecutors had urged the lengthy sentence, saying that Harris’ status as a popular celebrity had enabled him to “persuade and entice” his young victims to engage in sexual conduct.

While handing him the sentence, Judge Manish S Shah told the disgraced social media star and cheerleading champion to consider the it to be an “expression of the seriousness of your crimes, tempered with some hope that all is not lost for you or for your victims, and that in the future some healing can occur”.

Harris appeared in court for the sentence, which lasted around seven hours.

Addressing his victims before receiving his sentence, he said: “I am deeply sorry for all the trauma my abuse has caused you.

“I pray deep down that your suffering comes to an end,” he said, adding, “I’m not an evil person. I’m still learning who I am and what my purpose is.”

Harris, 22, has remained in custody at a federal detention centre since he was arrested in September 2020 on images of child sex abuse charges.

Prosecutors alleged at the time that he solicited videos and images from two 14-year-old brothers.

According to a complaint, federal prosecutors said that Harris admitted to repeatedly asking a minor teen for obscene videos and images between December 2018 and March 2020.

In December 2020, he was indicted on more charges alleging misconduct in Illinois, Florida and Texas.

At a plea hearing in February this year, Harris pleaded guilty to two of seven counts against him. These included persuading a 17-year-old to send him sexually explicit photographs for money.

The other count stemmed from a trip he took to Florida for the purpose of “engaging in illicit sexual conduct” with a 15-year-old.

Prosecutors agreed to drop the remaining five counts under a plea agreement.

A US charge related to images of child sex abuse carries a sentence ranging from five to 20 years and a second charge carries a maximum sentence of 30 years.

A Chicago native, Harris was the breakout star of Cheer. The Netflix series follows a cheerleading team from Navarro College in Corsicana, Texas, on its pursuit of a national title.

The second season of Cheer addresses the investigation into Harris, in an episode titled “Jerry”.

Vulnerable people turning to A&E because they feel they have nowhere...