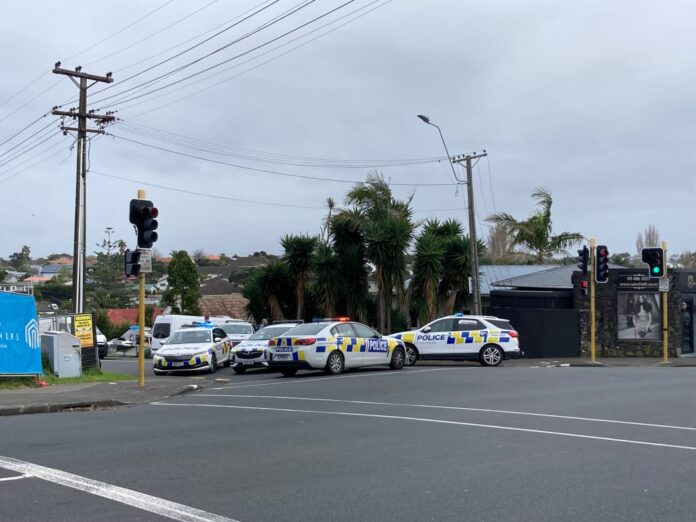 Police say they are responding to an incident on Auckland’s North Shore after reports of a person with a firearm.

Police on the corner of Bardia Street and Lake Road in Belmont, Auckland.
Photo: RNZ

About 15 minutes later, the schools posted on Facebook saying the lockdown had lifted.

In a statement, police said they said they responded to an incident in Belmont following reports of a person with a firearm.

A Devonport woman said she heard a car crash and saw a man running away before being tackled by police and arrested.

Lara Franks said she was coming back from the gym and was parking her car when she heard a loud bang.

Behind her, she could see a white car crashed into the back of a second car on Domain Street.

She said she saw a man run out of the car into a house, through a garden, smashing into a fence and into another property, where police arrested him.

Other locals described seeing police cars speeding through the area.

Earlier, Bayswater and Belmont’s schools posted on Facebook that everyone was safe.

An armed police officer at the scene of the incident.
Photo: RNZ / Finn Blackwell

Takapuna Grammar said students were safely inside buildings as instructed by police and the Ministry of Education.

Students at Takapuna Grammar said they were told their school was going into lockdown and to go inside and stay away from windows, though they weren’t told why.

They told and RNZ reporter it was “pretty scary” and they they were still feeling a bit shaken .

Northcote Intermediate said its lockdown was over.

“We have come out of lockdown and all students, staff and persons on-site are safely accounted for. Everyone did extremely well and responded to instructions. A notice will be going out to parents/caregivers tonight to provide some more information about our emergency lockdown procedures,” its principal Phil Muir said.

The Ministry of Education was informed and nearby schools went into lockdown, Inspector Jason Homan said.

Belmont Intermediate principal Nick Hill said the school was advised to go into lockdown as a precaution as there was a firearms incident in the area.

“Lockdown protocols were initiated and our parent community were made aware of the school going into lockdown.

“Our lockdown has since been lifted.”

Police said a cordon was still in place on the intersection of Bardia and Moa St and locals were asked to avoid the area.