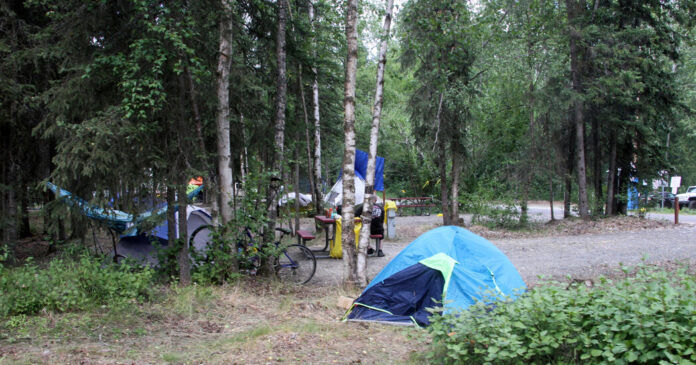 Four black bears that had repeatedly entered a campground for homeless people in Anchorage, Alaska, and rummaged through tents in search of leftover food and trash were killed on Tuesday because the authorities said they posed “a risk to human safety.”

A city spokesman said Wednesday that no one had been injured by the bears, which were killed by the Alaska Department of Fish and Game.

The bears — a sow with two cubs and another adult — had been eating food from tents at Centennial Campground, which is near a state park in southern Alaska and is managed by city officials, according to a statement from the Department of Fish and Game. The area is also home to “vast areas of bear habitat,” the department said.

The decision to move the homeless people to a new area had prompted concerns from some state officials and people in the community. State Senator Bill Wielechowski, a Democrat, said in a June 24 letter to Mayor Dave Bronson of Anchorage that transforming the park into a homeless camp “would create an unsafe environment for both campers and nearby residents.” (His letter, however, did not mention bear threats as a safety risk.)

Read More About the Homelessness Crisis in America

The killing of the bears raised questions in the community about the safety of the hundreds of homeless people living at the campground.

Corey A. Young, a spokesman for Mr. Bronson, said in a statement that officials “continue to inspect camps and educate campers about bear-safe practices.” He added that private security personnel were already at the site but that they would now be working around the clock.

“As many longtime Alaskans can attest to, bears do not go to just campgrounds,” he said. “During the summer, it is common to see them throughout the city in many neighborhoods. The priority will always be to protect humans and mitigate risks to bears.”

The tangle over the encampment comes as cities across the country continue to contend with homelessness in their streets and parks — an issue worsened by the pandemic. Homelessness in the United States rose by 2.2. percent in 2020 from the previous year, according to an annual nationwide survey from U.S. Department of Housing and Urban Development that was completed before the pandemic.

In 2021, a follow-up report from the agency found that there were more than 326,000 homeless people in the country, a decrease of 8 percent from 2020, though the agency warned that homelessness remained “an urgent crisis.” In Alaska, about 2,000 people were experiencing homelessness as of January 2020, up from about 1,900 the previous year.

The Department of Fish and Game said in its statement that keeping bears away from human food “is the most important part of preventing conflicts and reducing confrontations between bears and people.”

Because bears are “creatures of habit,” they seek out the same food spots yearly, the department said.

Dave Battle, the department’s area biologist in Anchorage, said in a statement on Wednesday that there were “still a lot of tents with food in them” in the campground.

“Until that changes, more bears are going to come into the campground and get into tents,” he said. “That’s a safety issue both for the people staying there now, and anyone who stays there after them.”

But bear attacks appear to be on the rise globally because of habitat overlap resulting from human population growth and outdoor recreation, according to the study.

Mr. Battle described the killing of bears as a “very temporary solution,” particularly at Centennial Campground.

“There are always going to be more bears in that vicinity because of its location,” he said. “And we can’t teach bears not to eat what they can find.”

About 100 convoy trucks in downtown Ottawa have children living inside:...

Authorities intercept more than 1 kilo of cocaine headed to Kenosha;...

California will end its indoor mask mandate next week.