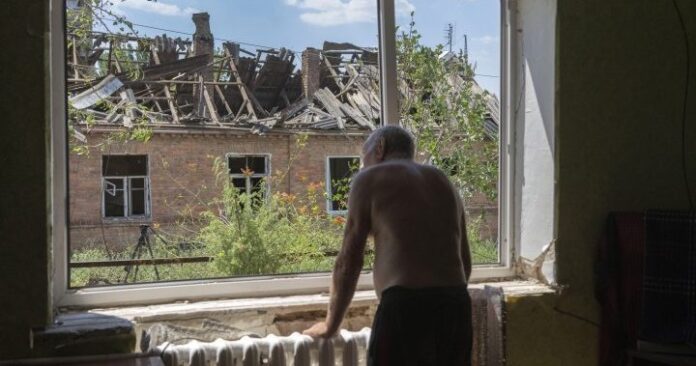 Russian shelling killed at least seven people in Ukraine over the past 24 hours and wounded 25 more, Ukrainian officials said Wednesday.

The country’s presidential office said Russian forces targeted cities and villages in southeast Ukraine, with most civilian casualties occurring in Donetsk province, where Russia stepped up its offensive in recent days.

Gov. Pavlo Kyrylenko said in a Telegram post that two people died in the city of Avdiivka, which is located in the center of the province, and the Donetsk cities of Sloviansk, Krasnohorivka and Kurakhove each reported one civilian killed.

“Every crime will be punished,” he wrote.

Kyrylenko urged the province’s more than 350,000 remaining residents to flee late Tuesday, saying that evacuating Donetsk was necessary to save lives and allow the Ukrainian army to put up a better defense against the Russian advance.

Donetsk is part of the Donbas, a mostly Russian-speaking industrial area where Ukraine’s most experienced soldiers are concentrated. Russian President Vladimir Putin on Monday declared the complete seizure of the region’s other province, Luhansk, after Ukrainian troops withdrew from the last city under their country.

Luhansk Gov. Serhiy Haidai denied Wednesday that the Russians had completely captured the province. Heavy fighting continued in villages around Lysychansk, the city Ukrainians soldiers withdrew from and which Russian troops took on Sunday, he said.

“The Russians have paid a high price, but the Luhansk region is not fully captured by the Russian army,” Haidai said. “Some settlements have been overrun by each side several times already.”

He said up to 15,000 residents remain in Lysychansk and some 8,000 in the nearby city of Sievierodonetsk, which Russian and separatist fighters seized last month.

Pro-Russian separatists have fought Ukrainian forces and controlled much of the Donbas for eight years. Before Russia invaded Ukraine on Feb. 24, Putin recognized the independence of the two self-proclaimed separatist republics in the region.

Since Russian forces failed to make inroads in capturing Kyiv, Ukraine’s capital, Moscow has concentrated its offensive on seizing the remaining Ukrainian-held areas of the Donbas.

Three districts of the city were targeted, Gov. Oleh Syniehubov said. Three people, including a toddler, sustained injuries, according to the governor. A university building and an administrative building were destroyed.

What is going to summer time camps appear to be this...