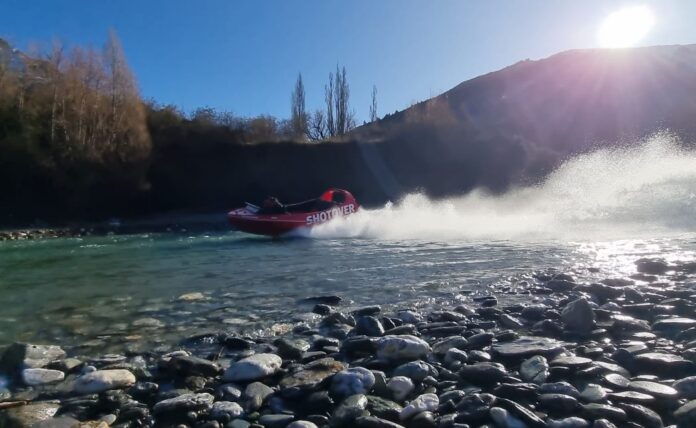 It is part of an 88-action plan Ngāi Tahu has released to tackle the causes and impacts of climate change.

In Queenstown, the familiar roar of V8 engines on the Shotover River is set to become a distant memory.

Ngāi Tahu Tourism is planning to have at least half of its jet boat operations – about 12 to 15 boats – converted to electric by 2030.

Its general manager Jolanda Cave said it would be an even better experience.

“You still have the sound of the jet units. But then things like coming into the canyons with the jet units and coming as close as we do at Shotover, it actually adds to the exhilaration.

“If you put it into places like Dart River and Hollyford, having a quieter boat in a serene landscape like that only enhances the experience.”

The project received funding from the Energy Efficiency and Conservation Authority in 2019.

It takes about an hour to charge the prototype, but that was expected to be a lot quicker with fast chargers in place.

“In Shotover, finding batteries that can charge within 25 minutes, but can run on the water for an hour – two trips – which is the exact same as what our fuel requirements are at the moment.”

Before Covid-19, more than half of Ngāi Tahu Tourism’s carbon footprint was from jet boats.

Cave said they wanted to make all their operations carbon neutral by 2050.

“I think it’s also saying a strong message to the tourism industry that if we can pivot and change as much as we have, so can you, and really challenging them to have a look at their operations on how they can do it as well in a unique and authentic way.”

The iwi would take major steps to cut its greenhouse gas emissions, embrace renewable energy and reduce its overall impact over the next nine years, she said.

That included hydrogen prototypes for its transport company and solar for its marae.

“We’ve got to have tangible actions that we can demonstrate to our people that we are making change.”

In the first three years, she said Ngāi Tahu has invested $27 million into climate action.

There were obvious reasons to take action, she said.

“Sixteen of our 18 marae are coastal so there are a number of challenges there with the sea level rise, so what action are we taking to protect and preserve those things into the future.

“So you’ll start seeing a lot of activities take place across Ngāi Tahu takiwā in the next three years.”

The boats would continue to run on the awa (river) while they transitioned, helping Queenstown’s economy, she said.

“Tourism is an important commercial activity of the tribe. It’s a way of us telling our story, putting our footprint on the landscape, and we’ll always be present in the tourism industry.

“So rather than take the jet boats off the river, we’re going to innovate … and we’ll phase out over time.”

“Looking at the boat, we’ve used one of our older hulls so to look at it you wouldn’t know any different from one of our current boats.

“It’s really when you get onboard and you have a look down the back where the passenger pod used to be, you’ll see the three big battery boxes.

“Then if you lift the engine hatch up, you’ve got the two electric motors in there which are so small compared to an internal combustion engine.

“However, around the back of the boat, you’ve got the same two jet units so from afar, you really can’t tell much difference at all.”

While electric jet boats would not be ready for commercial guests for several years, Ngāi Tahu said they were putting in the mahi to tackle the effects of climate change.

Penny Bell homicide: Daughter pleads for assist 30 years after of...

Mafia Killer Who Grew to become a Turncoat Is Launched from...

Mosque terror attacks: Muslims still at risk of being targets for...