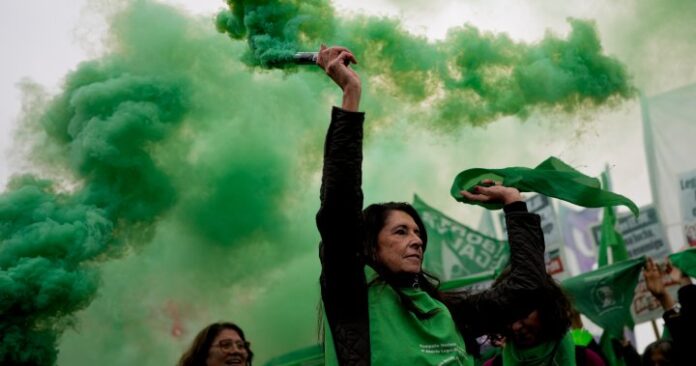 From the streets of Poland to crowds in Argentina, Mexico and, most recently, the United States following the overturning of Roe v. Wade, abortion rights protests have something in common: the colour green.

Green smoke, billowing in clouds through packed crowds as women and men fight for the right to make decisions about what is best for their bodies, families and futures.

But why the colour green?

The most recent demonstrations bedecked in the colour green are those taking place across the United States in the wake of the Supreme Court’s decision to overturn Roe v. Wade, the landmark 1973 court case that established a constitutional right to abortion in that country.

It was during protests in Latin America, not the United States, where a hallmark of the abortion rights fight was born, and where it has continued to gain momentous political force over recent years.

According to both the Washington Post and the French newspaper Le Monde, the origin dates back to demonstrations in the late 1970s in Argentina, when the families of people who disappeared under the country’s military dictatorship wore white scarves during protests outside the presidential palace.

Two decades later, the push for abortion rights in that country was growing and Marta Alanis, founder of the abortion rights group Catholics for the Right to Decide, had an idea.

In an interview with Le Monde, she said she wanted to bring bandanas to an abortion rights protest in 2003 to pay homage to the families of the people disappeared by the junta — but didn’t want to use the white colour that had defined those earlier efforts.

She and other organizers decided to use green instead — “a symbol of hope, health, life,” Alanis said in the interview with Le Monde in May 2022.

The rest, as the saying goes, is history.

The green bandanas quickly took off, becoming a familiar and frequent sight at abortion rights protests in Argentina in 2015 and 2018, as well as across Latin America, where the political movement for gender equality and abortion access has been making inroads over the past decade.

It’s all part of a movement known as the “Marea Verde” — the Green Wave.

The years-long efforts of organizers in Argentina culminated in a major victory in December 2020, when the country legalized abortion up until the 14th week of a pregnancy following years of protests.

Argentinians flooded into the streets, wearing green and celebrating the decision.

The green scarves and bandanas have over recent years become “a resistance symbol,” according to Human Rights Watch, as abortion rights advocates continue pushing for increased access to the health-care service across Latin America.

Several Mexican states have decriminalized abortion since 2007 and in September 2021, the Mexican Supreme Court ruled it was unconstitutional for states to punish women for getting abortions.

That ruling is expected to lead to a domino effect across the country as lower courts will be forced over coming years to issue rulings in keeping with that one.

The Green Wave also secured a major win earlier this year when Colombia in February decriminalized abortions until the 24th week, and Chile is set to vote in September 2022 on a constitutional redraft that would, if passed, enshrine the right to abortion, Reuters reported earlier this year.

In countries like Poland, which implemented a near-total abortion ban last year, green is now a frequent sight at demonstrations and strikes opposing that decision.

That country, along with Malta, now has the most restrictive abortion bans in the European Union, according to Amnesty International, which has warned that the chill effect of the ban in Poland is causing doctors to refuse to provide abortions even in the rare cases where it remains permitted under the law.

Tensions in the U.S. are becoming more fraught in the lead-up to the midterm elections, where abortion rights are expected to play to a central role, and more protests are virtually guaranteed as states emboldened by the fall of Roe v. Wade continue to crack down on abortion access.

While the outcome is uncertain, at least one thing appears clear: green is now firmly entrenched as the colour of abortion rights and with more protests on the horizon, expect to see a lot more of it.

WHO says additional vaccines ought to go to poor nations, not...

Save the Children staff among 35 killed in Myanmar Christmas Eve...