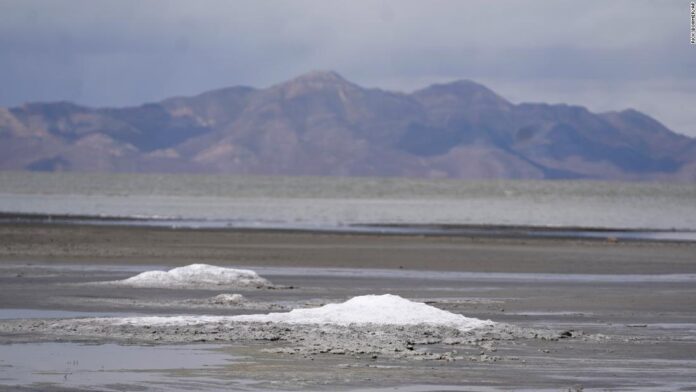 The lake’s surface water elevation fell to 4,190 feet on Sunday, according to data from the US Geological Survey — below the previous record set in 2021 and the lowest it has ever been since it was first measured in the mid-1800s. Before last year, the lake’s low record was 4,191.4 feet in October 1963.

Utah officials are now calling for “urgent action” to preserve the Great Salt Lake amid its third straight year of decline.

“It’s clear the lake is in trouble,” Utah Department of Natural Resources Executive Director Joel Ferry said in a statement. “We recognize more action and resources are needed, and we are actively working with the many stakeholders who value the lake.”

“In any given year, [Great Salt Lake] levels will rise and fall,” O’Leary told CNN. “Lake levels rise when inflows exceed evaporation and fall when evaporation exceeds inflows. Last year, when the historic low was previously broken, lake levels declined until mid-October before leveling off.”

Water officials say they have seen water evaporation and depletion exceed the amount of water that’s making it into the lake, officials say. Laura Vernon, the Great Salt Lake coordinator with the Utah Department of Natural Resources, said they ideally like to see the lake increase by at least 2.5 feet each year to make up for the amount of water it typically loses.

“But this year, the lake just rose over one foot this past year,” Vernon told CNN.

The declining Great Salt Lake poses “numerous potential impacts,” particularly to the economy, said Vernon. From the mineral industry to the harvest industry as well as recreation industry, the Great Salt Lake contributes $1.3 billion to the annual economy, according to a state assessment. If the lake continues to dry up, the economic toll would range from $1.7 billion to $2.2 billion each year.

Vernon also noted that since the lake contributes roughly 7,7000 jobs to the local economy, at least 6,500 people in Utah could lose their jobs should the lake dry up.

“From an economic perspective, the impacts could be pretty substantial,” Vernon said. “We’ve also seen, with drying terminal lakes around the world, that respiratory illness increases as lake levels decline, because people are breathing in more of the particulate matter in the air that are blowing around.”

Terminal lakes, like the Great Salt Lake, are ones where water can flow into but not out of the basin. And when strong winds blow over a drying lake bed, they kick up tiny particles that can be inhaled and cause damage to the lungs and exacerbate other respiratory illness. These pollutants have been linked to health complications such as asthma, heart disease and chronic bronchitis.

Although the Great Salt Lake isn’t a water reservoir like the rapidly plummeting Lake Mead and Lake Powell, Vernon said it’s still a critical natural resource and a good reason for people to conserve more water, especially given how much Utah’s population has grown over the last decade.

“We need to be more aggressive in how we use water and how we manage water in the state,” she said. “We live in one of the driest states in the nation and we need to act like it.”

With the climate getting hotter, drier, and windier, many lakes across the West will only see more evaporation and water loss. Because of this reality unfolding in the Great Salt Lake, Vernon said, many state officials have turned their attention toward finding solutions to adapt or mitigate the crisis.

“We are mindful of the low lake levels and anticipate that the lake will continue to decline over the summer months,” she said. “Changes aren’t going to happen overnight, but we’re hoping that we can make some changes that will bring more water to the lake.”

Israel unleashes airstrikes throughout Gaza, killing 1 and injuring a number...

We requested, you answered: The most effective monetary recommendation you ever...