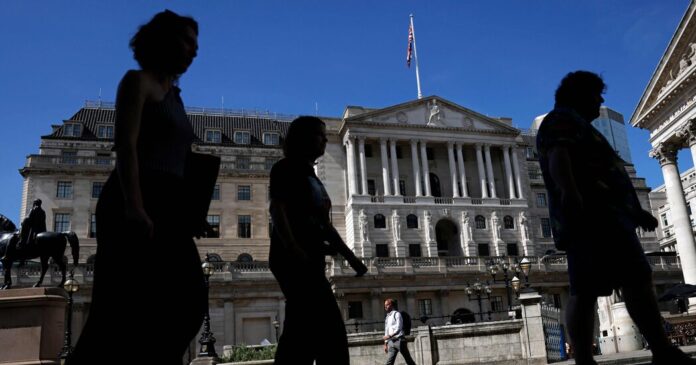 The British pound rose slightly against the U.S. dollar on Wednesday morning, a small rebound from a 1.5 percent drop the day before, as investors sought the safety of the U.S. currency amid growing risks of recession around the world.

For financial markets, the global trends of rising inflation, worsening energy security and a weakening growth outlook outweighed the sudden upheaval in British politics. In the short term, there isn’t an obvious way for traders to take advantage of the news, Jordan Rochester, a strategist at Nomura, a bank, wrote in a report on Tuesday night. More information is needed about whether Mr. Johnson will stay in power and the plans of his replacement ministers. The recent fall in the pound is because of economic factors, Mr. Rochester wrote.

On Tuesday, Rishi Sunak cited the economy in his explanation for why he resigned as chancellor of the Exchequer, Britain’s top finance official. He was scheduled to give a speech next week with Mr. Johnson on their plan to support the economy through a period of high inflation and slow economic growth, and it seems that the differences in their proposals were too big to be breached.

“It has become clear to me that our approaches are fundamentally too different,” Mr. Sunak wrote in his resignation letter to the prime minister.

Just a few hours later, Mr. Johnson announced Mr. Sunak’s replacement as chancellor: Nadhim Zahawi, who had been the education secretary. Mr. Zahawi was initially brought into the cabinet only last year, having previously overseen the rollout of the coronavirus vaccines.

On Wednesday morning, Mr. Zahawi said, “I’ve got to rebuild the economy and turn to growth in the economy, that’s my focus.”

He faces a major challenge because Britain’s economic outlook has turned sour. Inflation is at its highest level in four decades and is not expected to peak until it climbs above 10 percent in the fall, when the cap on household gas and electricity bills will be reset higher. Households are facing their worst squeeze on incomes in generations, and the pain is already acute as people try to spend less, while credit card and other personal debt is rising.

The Bank of England has raised interest rates to their highest level since 2009 and has said that more increases are likely to come in the fight against rising inflation, even as the outlook for economic growth deteriorates. Businesses are facing rapidly rising costs, with many struggling to hire workers since Brexit and the pandemic have diminished the pool of available workers.

Mr. Sunak announced billions of pounds in additional spending in May to help people with the rising cost of living, partly funded by a windfall tax on oil and gas companies. But he has expressed reservations about how far the government can use spending to lessen economic hardship and favors corporate investment and lower taxes to increase productivity.

Differences in policy approaches and a succession of economic shocks have impeded the government’s efforts to pursue a consistent economic strategy. Late last year, Mr. Johnson declared that he could build a high-growth, high-wage economy, and now he is warning against big pay rises that could worsen inflation.

As pay falls far behind inflation, workers have called strikes that set Britain up for a summer of labor unrest. Recently, train workers and criminal defense lawyers walked off the job, and health care workers, schoolteachers and postal employees are among those threatening to strike in the coming months.

There’s More to Art in Venice Than the Biennale