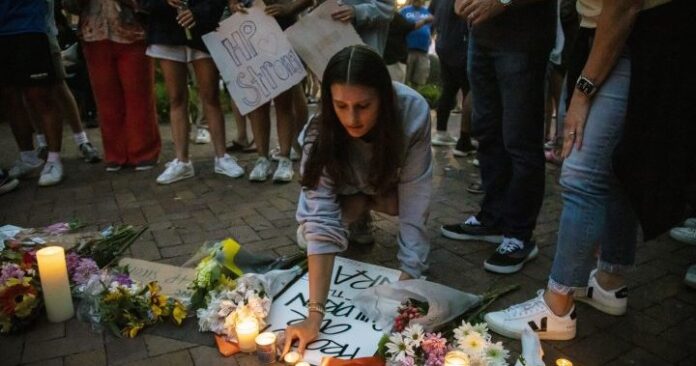 It was 10:17 a.m. on the Fourth of July, central daylight time, when Shelly Sella’s cellphone rang. She remembers the time precisely.

What she heard – it was her daughter, Lauren – she will never forget.

“There’s no mother on planet Earth, I don’t care how old your child is, that wants to get that call.”

Lauren and her friend Amanda Levy, who was visiting from Connecticut, were at the Fourth of July parade Monday in the tiny Chicago suburb of Highland Park when the shots rang out.

“I think I blacked out,” said Levy, 28, as she described seeing some of the floats in the parade come to an unexpected stop.

“I was confused. And then we saw the band running on the sidewalks. And that’s when I looked at (Lauren) and we saw a cop running the opposite way.”

0:39
‘No information’ to suggest July 4 parade shooting was motivated by race, religion: police

‘No information’ to suggest July 4 parade shooting was motivated by race, religion: police

Seven people were killed and 38 people were injured Monday when a lone gunman, perched on a rooftop and disguised in women’s clothing, opened fire on spectators while they were watching the Fourth of July parade pass through the suburban downtown.

At the intersection of Central Ave. and Green Bay Rd., where journalists and local residents mingled awkwardly Tuesday in what is becoming an uncomfortable U.S. ritual, the detritus of an abandoned national holiday was still on display.

Upturned folding chairs, miniature flags flapping in the breeze and a child’s pink bicycle were still visible behind police barricades, a testament to the moment the community’s festive, patriotic fervour dissolved into abject panic.

A collection of flowers and handwritten expressions of grief steadily grew throughout the afternoon as residents and visitors stopped by the scene, stepping over a gauntlet of police tape to pay their respects.

Sella and Levy were part of the crowd of onlookers who cheered with relief Tuesday as prosecutors announced seven first-degree murder charges against Robert E. Crimo III, the alleged perpetrator.

2:57
‘This is a gun country’: Philadelphia mayor exasperated after shooting near 4th of July celebration

‘This is a gun country’: Philadelphia mayor exasperated after shooting near 4th of July celebration

Christopher Covelli, a spokesman for the Lake County Major Crime Task Force, said police first responded to Crimo’s home in April 2019 after learning he had attempted suicide a week earlier.

The next interaction happened in September of that year, when a family member reported that Crimo had a collection of knives and that he was threatening to “kill everyone.” No charges or complaints were filed.

Crimo legally purchased five guns, including the rifle used in the attack and one found in a vehicle with him when he was arrested, as well as handguns and other firearms seized at his father’s home.

Highland Park shooting suspect: What we know about the man in custody

Covelli said the suspect planned the attack for several weeks and wore women’s clothing to conceal his facial tattoos and to blend into the crowd as he fled the scene.

He said the shooter, armed with a high-powered rifle, used a fire escape ladder to climb onto the roof of a business along the parade route before he fired more than 70 rounds into the crowd.

When it was over, the attacker allegedly abandoned his rifle and escaped, blending into the crowd as if he were an “innocent spectator.”

Police have no information that it was religiously or racially motivated, said Covelli, describing the attack as “completely random.”

“What should have been a celebration of freedom has ended in despair for our community,” Rinehart said, a battery of officials, investigators and police behind him.

“Their freedom matters too.”

0:46
Police name person of interest in 4th of July parade shooting in Illinois

These days, in the country known for life, liberty and the pursuit of happiness, that freedom may well include leaving for good.

“I don’t like this world that we live in at all,” Sella said.

“I have serious concerns about where we’ve been, where we’re going. And quite honestly, I have contemplated several times recently leaving this country.”

So, too, has Jim Perlman, a lifelong Highland Park resident who said he’s not alone in considering his options.

“The way the momentum is going, a lot of people are talking about it and people want to leave,” said Perlman, whose apartment is less than two blocks from where the shooting occurred.

Where would they go? Sella said she has family in Israel, a country with its own reputation for violence, “but it’s more predictable,” she said.

As for Perlman, he’s thinking closer to home.

“Everybody talks about Canada,” he said. “We may be up there.”

What student loan forgiveness would mean to these five borrowers