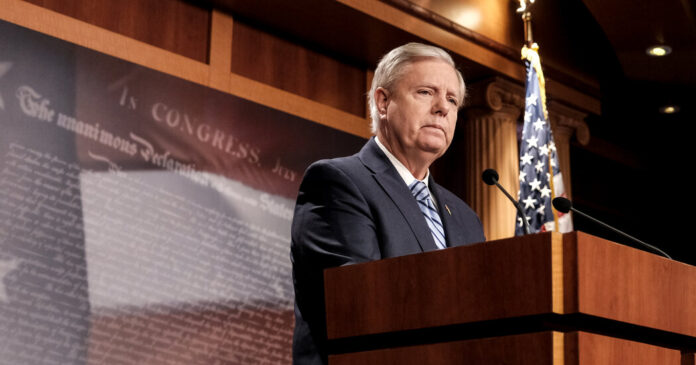 Seven advisers and allies of Donald J. Trump, including Rudolph W. Giuliani and Senator Lindsey Graham, were subpoenaed on Tuesday in the ongoing criminal investigation in Georgia of election interference by Mr. Trump and his associates. The move was the latest sign that the inquiry has entangled a number of prominent members of Mr. Trump’s orbit, and may cloud the future for the former president.

The subpoenas underscore the breadth of the investigation by Fani T. Willis, the district attorney of Fulton County, which encompasses most of Atlanta. She is weighing a range of charges, according to legal filings, including racketeering and conspiracy, and her inquiry has encompassed witnesses from beyond the state. The latest round of subpoenas was reported earlier by The Atlanta Journal-Constitution.

The Fulton County investigation is one of several inquiries into efforts by Mr. Trump and his team to overturn the election, but it is the one that appears to put them in the greatest immediate legal jeopardy. A House committee continues to investigate the Jan. 6, 2021, attack on the Capitol. And there is an intensifying investigation by the Justice Department into a scheme to create slates of fake presidential electors in 2020.

Amid the deepening investigations, Mr. Trump is weighing an early entrance into the 2024 presidential race; people close to him have said he believes it would bolster his claims that the investigations are politically motivated.

A subpoena is not an indication that someone is a subject of an inquiry, though some of the latest recipients are considered at risk in the case — in particular Mr. Giuliani, a personal lawyer for Mr. Trump who has emerged as a central figure in the grand jury proceedings in the Georgia investigation. Mr. Giuliani spent several hours speaking before state legislative panels in December 2020, where he peddled false conspiracy theories about corrupted voting machines and a video that he claimed showed secret suitcases of Democratic ballots. He told members of the State House at the time, “You cannot possibly certify Georgia in good faith.”

Ms. Willis’s office, in its subpoena, said Mr. Giuliani “possesses unique knowledge concerning communications between himself, former President Trump, the Trump campaign, and other known and unknown individuals involved in the multistate, coordinated efforts to influence the results of the November 2020 election in Georgia and elsewhere.”

Though the subpoenas were issued Tuesday, not all had necessarily been received. Robert J. Costello, a lawyer for Mr. Giuliani, said, “We have not been served with any subpoena, therefore we have no current comment.”

Others sent subpoenas included Jenna Ellis, a lawyer who worked closely with Mr. Giuliani to overturn the 2020 election results; John Eastman, the legal architect of a plan to keep Mr. Trump in power by using fake electors, and Mr. Graham, the South Carolina Republican who called the Georgia secretary of state, Brad Raffensperger, a fellow Republican, days after the election to inquire about the rules for discarding mail-in ballots.

On Wednesday, lawyers for Mr. Graham said that they had been told he was “neither a subject nor target of the investigation, simply a witness,” and added that they would fight the subpoena.

“As chairman of the Senate Judiciary Committee, Senator Graham was well within his rights to discuss with state officials the processes and procedures around administering elections,” Mr. Graham’s lawyers, Bart Daniel and Matt Austin, said in a statement. “Should it stand, the subpoena issued today would erode the constitutional balance of power and the ability of a member of Congress to do their job.”

Another prominent lawyer who received a subpoena, Cleta Mitchell, was on a Jan. 2, 2021, call that Mr. Trump made to Mr. Raffensperger where he asked him to find enough votes to reverse the state’s results. The subpoena to her said, “During the telephone call, the witness and others made allegations of widespread voter fraud in the November 2020 election in Georgia and pressured Secretary Raffensperger to take action in his official capacity to investigate unfounded claims of fraud.”

Two other Trump lawyers were also subpoenaed: Jacki Pick Deason, who helped make the Trump team’s case before the Georgia legislature, and Kenneth Chesebro, whose role has come into sharper focus during the House Jan. 6 hearings in Washington. In an email exchange with Mr. Eastman in the run-up to the Jan. 6 attack, he wrote that the Supreme Court would be more likely to act on a Wisconsin legal challenge “if the justices start to fear that there will be ‘wild’ chaos on Jan. 6 unless they rule by then, either way.”

Most of those subpoenaed could not be immediately reached for comment. A spokesman for the Texas Public Policy Foundation, where Ms. Deason is a senior fellow, declined to comment.

The special grand jury was impaneled in early May and has up to one year to complete its work before issuing a report advising Ms. Willis on whether to pursue criminal charges, though Ms. Willis has said she hopes to conclude much sooner. In official letters sent to potential witnesses, her office has said that it is examining potential violations that include “the solicitation of election fraud, the making of false statements to state and local governmental bodies, conspiracy, racketeering, violation of oath of office and any involvement in violence or threats related to the election’s administration.”

The new subpoenas offered some further clues about where her investigation is focused.

Mr. Eastman was a key witness at one of the December 2020 legislative hearings that were led by Mr. Giuliani. Ms. Willis’s office said in its subpoena to Mr. Eastman that during the hearing he had “advised lawmakers that they had both the lawful authority and a ‘duty’ to replace the Democratic Party’s slate of presidential electors, who had been certified as the duly appointed electors for the State of Georgia after the November 2020 election, due to unfounded claims of widespread voter fraud within the state.”

They called the appearance part of a “multistate, coordinated plan by the Trump campaign to influence the results of the November 2020 election in Georgia and elsewhere.”

The subpoena also noted that Mr. Eastman “drafted at least two memoranda to the Trump Campaign and others detailing a plan through which Vice President Mike Pence, as president of the Senate, could refuse to count some of President Joe Biden’s electoral votes” on Jan. 6 — a plan that was rejected by Mr. Pence.

Regarding Ms. Ellis, Ms. Willis’s office said that even after Mr. Raffensperger’s office debunked claims of fraud by election workers at an Atlanta arena, Ms. Ellis persisted. “Despite this, the witness made additional statements claiming widespread voter fraud in Georgia during the November 2020 election,” the subpoena said.