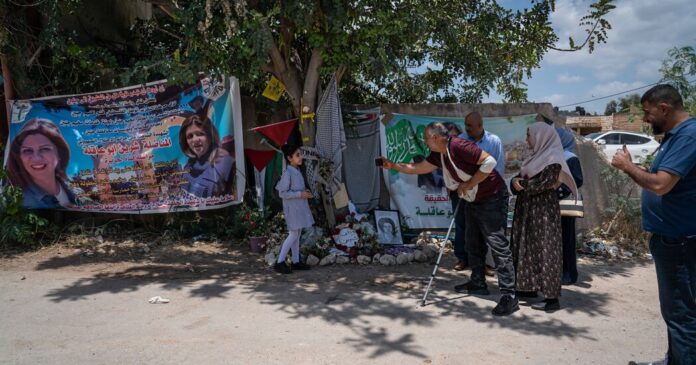 JERUSALEM — The bullet that killed Shireen Abu Akleh, the Palestinian American journalist shot in the occupied West Bank in May, was most likely fired from Israeli military lines but was too damaged to say for sure, the State Department said on Monday.

The damage to the bullet made it difficult to draw a definitive conclusion about the gun it was fired from, according to a State Department statement. But shots fired from the position of the Israel Defense Forces were “likely responsible for the death,” it added.

U.S. officials “found no reason to believe that this was intentional but rather the result of tragic circumstances during an I.D.F.-led military operation,” the statement said.

Palestinian officials have said that Ms. Abu Akleh was intentionally killed by an Israeli soldier.

The Israeli government had cast doubt on that, saying that she was hit by either an Israeli soldier or a Palestinian gunman. Israeli officers have said that an Israeli soldier from Duvdevan, an elite unit, fired in Ms. Abu Akleh’s direction, but that it was impossible to determine who shot her without examining the bullet.

A monthlong investigation by The New York Times found that the bullet that killed Ms. Abu Akleh had been fired from the approximate location of an Israeli military convoy early that morning, most likely by a soldier from an elite unit, corroborating eyewitness reports from the scene.

Forensics experts can match a bullet with the rifle that fired it, based on microscopic marks left on the surface of the bullet as it exits the rifle barrel. But photographs showed the bullet was partly crushed and the autopsy conducted by the Palestinian Authority concluded that the bullet had entered Ms. Abu Akleh’s head and later hit the side of her helmet.

The Biden administration was drawn into a mediation role after Israel said it could not determine whether its soldier fired the fatal shot without being provided with the bullet. But the Palestinian leadership said it did not trust the Israeli investigators enough to hand the bullet over.

The need for a resolution became more urgent in recent days because it threatened to overshadow discussions during a visit next week by President Biden to Israel and the West Bank — his first to the region as head of state.

Ms. Abu Akleh, a veteran television reporter for Al Jazeera and a household name in the Middle East, was killed on May 11 while covering an early-morning Israeli Army raid in the West Bank city of Jenin.

Her killing set off international outrage, and led to pressure on President Biden from American lawmakers who demanded greater U.S. involvement in the investigation into the death of an American citizen.

For Palestinians, Ms. Abu Akleh’s death came to embody the dangers and frustrations of living under Israeli military occupation. Palestinian deaths rarely attract international scrutiny, and soldiers accused of crimes against Palestinians in the West Bank are rarely convicted.

But Israel said she might have been killed by Palestinians firing indiscriminately during clashes with Israeli soldiers, and denied that its soldiers would intentionally harm a journalist.

She was killed amid a wave of Palestinian attacks that killed 19 Israelis and foreigners. Some of the attackers had come from the Jenin region, and in response, the Israeli military launched several raids into the area, during which its soldiers were often met with Palestinian gunfire.

How this UAE household spends lower than Dh700 per 30 days...

Comptroller: Israel is a great distance from ‘one-touch’ digital providers