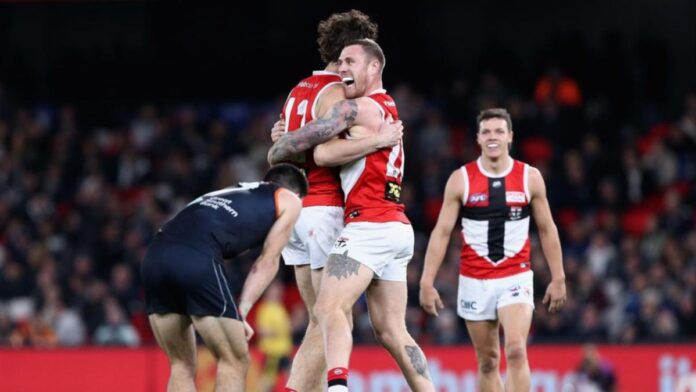 St Kilda are back in the AFL finals hunt, snapping a three-game losing streak by downing Carlton by 15 points in a dramatic contest at Marvel Stadium.

Humbled by consecutive insipid efforts as they dropped out of the top-eight, the desperate Saints responded in ferocious fashion on Friday night by outworking the in-form Blues.

But the result might have come at a significant cost for the Saints, losing key defender Dougal Howard to a knee injury in the third quarter and youngster Hunter Clark to a badly broken nose.

Clark was taken off on a stretcher with just seven minutes remaining, and the Saints leading by 12 points, after colliding in sickening fashion with teammate Dan Butler.

It continues a horror run for Clark, who suffered a broken jaw last year and missed the early part of this season with a shoulder injury.

With sore players on the bench, the Saints rallied again as Tim Membrey snapped an extraordinary goal, his fourth, to seal the win with three minutes left.

“It’s really pleasing for the players because they’ve worked so hard during the season,” St Kilda coach Brett Ratten said.

“They’ve done a lot of hard work this year and just really pleased to get back on the winners list but play the way we want to play.”

Carlton lost no admirers, dominating periods of the match, but let themselves down with inaccurate kicking at goal and blew an opportunity to consolidate their spot in the top-four.

Blues pair Tom De Koning and George Hewett missed easy set-shots just before three-quarter-time, before Max King and Jack Steele then capitalised with opportunistic and crucial goals in a minute down the other end.

“We probably throughout the night didn’t respect their pressure as much as what we should have,” Carlton coach Michael Voss said.

“It was really down to efficiency, I’d like to create another story, but that was it.”

Paddy Ryder and Bradley Hill missed last week’s deflating loss against the Sydney Swans but the electric pair were two of the Saints’ best and most influential players.

Ryder and Hill, along with the prolific Jack Sinclair (37 possessions), set the tone early as the Saints’ intensity undid Carlton.

Saints utility Mason Wood could attract attention from the match review officer for a bump on Adam Saad.

The Blues defender was not injured in the incident but Wood appeared to make late contact with Saad’s head.

St Kilda host Fremantle at Marvel Stadium in a blockbuster clash next Saturday night, while the Blues travel to Optus Stadium to face improving West Coast..

India to tour South Africa but no T20Is