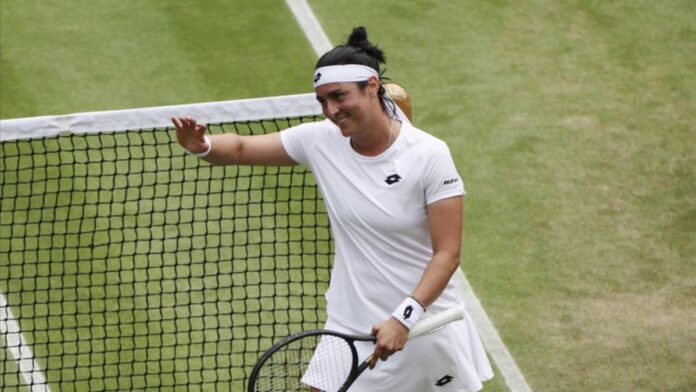 Third seed Ons Jabeur has once again raced through her latest match at Wimbledon to book a place in the fourth round.

A 6-2 6-3 victory over Diane Parry in 68 minutes on Friday was the longest amount of time the Tunisian had spent on court at the All England Club this summer.

But she has still only played just over three hours at SW19 so far.

Jabeur was in superb touch against her French opponent and showed her full repertoire of tricks on centre court with several trademark drop shots able to help her into the last 1 6.

“It was a great match for me,” the world No.2 said on court.

“It is tough to play young, talented players like her, especially in a great tournament I love so much, so happy to get it done in two sets and I hope to continue playing this way.”

After racing through her opening two matches with Mirjam Bjorklund and Katarzyna Kawa, a similar pattern emerged in this third-round tie after Jabeur broke three times in the first set.

Parry did eventually get on the board and avoid the bagel with 31 minutes played but a big ace down the middle sealed the opener for the well-backed third seed.

Teenager Parry had also made the round of 32 at Wimbledon in 2021 and played with more purpose in the second but had no answer to some of Jabeur’s wizardry.

A stunning drop shot after running into the net sealed a key hold and another contributed towards a second break to help the right-hander secure an eighth win in a row on grass.

Jelena Ostapenko was the first player into the fourth round but she needed three sets to beat Romanian Irina Begu.

Tsurenko, who wore a blue and yellow ribbon in support of Ukraine and will donate Stg 12,000 ($A21,000) of her prize money back to her home country to help with the war, admitted: “A few days like that happened to me feeling nervous with no reason.

“Let’s say, I mean, no reason, no real reason. I know that there is a war at home, and I think it’s just makes me too nervous sometimes. It’s definitely affecting, but probably I was just not able to separate today.”

Niemeier’s opponent for a place in the quarter-finals will be Britain’s Heather Watson after she opened up on court 1 with a 7-6 (8-6) 6-2 success over Kaja Juvan.

It sent the home favourite through to the fourth round of a grand slam for the first time in 43 attempts.

The 30-year-old had been 5-0 up but was broken when she had the chance to serve for the match before she eventually got the job done.

“It wouldn’t be me if there wasn’t a bit of drama at the end,” Watson said.

“It means everything playing here at home in front of you guys.”