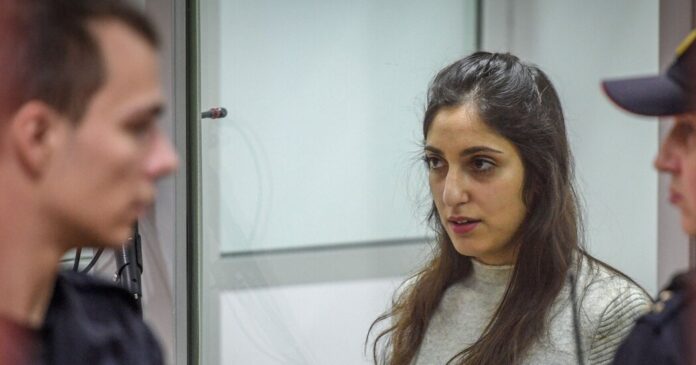 The detention facility just outside Moscow where Brittney Griner, the American basketball star, has been held is a former orphanage rebuilt a decade ago to house women jailed before trial and, separately, women serving their prison sentences.

Thousands of Russian women have passed through it, along with at least one other well-known foreigner: Naama Issachar, the Israeli-American arrested in April 2019 when the Russian police said they had found a third of an ounce of marijuana in her luggage as she was connecting at a Moscow airport.

Ms. Issachar was sentenced to seven and a half years in prison on drug possession and smuggling charges before President Vladimir V. Putin pardoned her, 10 months after she was first arrested, as she became a political pawn in the complex relationship between Russia and Israel.

In jail, Ms. Issachar told her mother: “The clouds in Moscow are pretty.”

It was all she could see of the outside world.

Now it is Ms. Griner, also held on drug charges, who is a pawn — American officials call her a hostage of the Kremlin — but the geopolitics at stake, amid the war in Ukraine and Mr. Putin’s showdown with the West, are far more fraught.

In a telephone interview from Israel, Ms. Issachar’s mother, Yaffa Issachar, said that her daughter had cried when she heard about Ms. Griner’s case, telling her: “I know what she’s going through now.”

The mother said that Ms. Issachar had been treated relatively well by her cellmates, but that she feared that Ms. Griner, as a gay woman, could be treated worse because of Russia’s conservative attitudes and restrictive laws surrounding homosexuality.

Yaffa Issachar said her daughter had been moved through three Russian detention facilities, including three months in the one where Ms. Griner is expected to stay through the duration of her trial, which started on Friday. It is in the village of Novoye Grishino, a 50-mile drive from central Moscow.

The Russian authorities have not disclosed Ms. Griner’s whereabouts. The New York Times was able to identify the prison from a photograph published online by a visitor, and the location was confirmed by a person familiar with the case. Ms. Griner has been held in the pretrial detention center of the facility, which also includes a larger penal colony for women serving out their sentences, with its own sewing factory and Russian Orthodox church.

Video footage of the prison available online shows tall, gray walls, old prison bars and a rusty monument to Lenin in the courtyard. Ms. Issachar, who was allowed to visit her daughter twice a month, also remembers the Lenin monument — along with the din of barking prison dogs that, she said, were being trained in the yard.

For Ms. Griner, every day in the facility looks pretty much the same, said Yekaterina Kalugina, a journalist and member of a public prison monitoring group who has visited Ms. Griner in the prison.

What to Know About Brittney Griner’s Detention in Russia

Why was she in Russia? Griner was in Russia playing for an international team during the W.N.B.A. off-season. Trading rest for overseas competition is common among the league’s players for many reasons, but often the biggest motivation is money.

Does this have anything to do with Ukraine? Griner’s detention comes during an inflamed standoff between Russia and the United States over Russia’s invasion of Ukraine, but it is still unclear whether Russia might have targeted Griner as leverage against the United States.

The inmates wake up, have breakfast in their cell — usually some basic food — and then go for a walk in the prison’s courtyard, which is covered by a net. The rest of the day is filled with reading books — Ms. Griner has been reading Dostoyevsky in translation, for instance — and watching television, though all of the channels are in Russian, Ms. Kalugina said.

The cell has a separate private washroom, she said, something of a novelty for Russian prisons. Inmates can order food online and use a refrigerator in the cell for groceries. They are allowed to take a shower only twice a week.

Ms. Issachar said it would take as long as four hours to complete the paperwork to enter the prison, with all of the food she was bringing in painstakingly inspected — down to the tea bags, which had to be cut open, their contents emptied into a plastic bag.

She could see her daughter only through glass, and talk to her only through a telephone. She said that her daughter had been allowed weekly visits by a rabbi, who would pass letters between them; under prison regulations, the rabbi was allowed to be in the same room as the inmate.

The isolation for her daughter was severe, Ms. Ishaffar said. “Mommy, the fall started,” she recalled her daughter telling her at one point. “I see the leaves coming down.”

Ms. Ishaffar suggested that Ms. Griner’s family find a priest who could visit her.

“There is somebody watching them,” she said, “but at least it’s a human she can talk to.”

A new brand of activist takes aim at the Ukraine war...