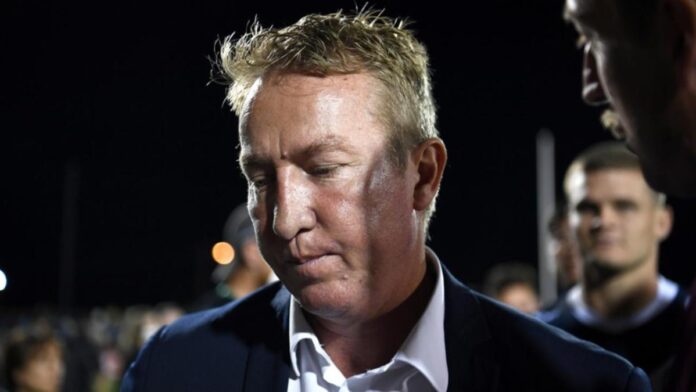 Sydney Roosters coach Trent Robinson could face scrutiny from the NRL after taking aim at the officiating of his side’s 26-18 loss to Penrith.

The Roosters had only 28 per cent of the territory in Friday night’s game and were on the wrong end of an 8-3 penalty count but managed to keep pace with the reigning premiers on the back of strong defence.

After the match, Robinson lamented a series of “big decisions” from referee Gerard Sutton that he believed cost his side.

Robinson questioned Sutton’s decision to sin bin Angus Crichton after the play had moved past his professional foul and was also critical of a dangerous tackle penalty blown against Sam Verrills that put Penrith in position to score.

“(The penalty against Verrills) was just a horrible decision,” Robinson said.

“We shouldn’t have let a try in on the end of it but there were so many poor decisions tonight.

“The sin-binning…we’re not playing rugby union. You either stop the game and send him to the bin or you don’t.

“They’re big decisions that you can’t get wrong.”

Robinson appeared to suggest Sutton chose not to award penalties to the Roosters that he would have paid the Panthers.

“It wasn’t a good enough performance from him,” he said.

“It wasn’t going to happen in Roosters’ colours. That’s not bias, that’s a fact, that you’re not going to get those opportunities.

“Obviously there were issues there with our team and not the other team.”

Captain James Tedesco consulted with the referee throughout the night but said there “wasn’t much explanation” for the skewed penalty count.

“It was frustrating. It felt like we were defending our line so well and then we would just get a penalty against us,” he said.

When asked whether he agreed with Robinson’s complaints, Panthers coach Ivan Cleary was tight-lipped.

Victor Radley left the field for a head injury assessment late in his first game back from an ankle injury but Robinson said his lock forward would not face more time on the sidelines.

“He didn’t even know why (he was taken off),” Robinson said.

The Roosters have the bye in round 17 but Robinson said playmaker Luke Keary would make his return from a head knock the following week.

“That’s the plan, that’s what he’s working towards,” Robinson said.

“He’s back on some of his progressions to get towards that.”

Keary suffered five concussions between 2018 and 2019 so the Roosters are managing his return with extra care.

Has our appetite for TV reboots been exhausted?