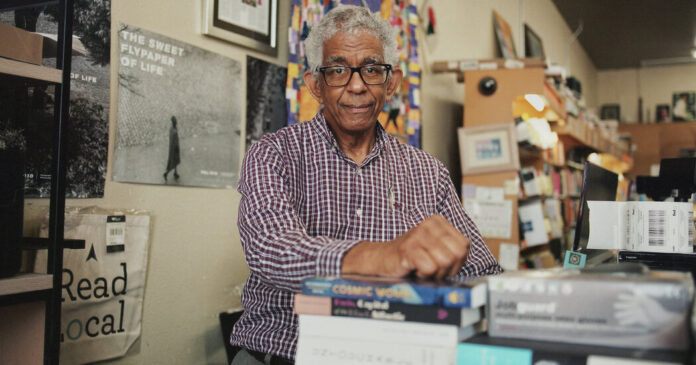 LOS ANGELES — When James Fugate and Tom Hamilton started Eso Won Books in 1988, their books, almost all by Black authors, were stacked in dozens of crates; some in Fugate’s apartment, the rest in Hamilton’s garage.

Nearly every weekend, at least one of them would haul their books to a community event in Los Angeles. Whatever money they made selling books, they spent on books. Soon, customers were coming to their homes, asking for specific titles.

In 1989, Hamilton and Fugate opened the brick-and-mortar store Eso Won Books in the bedroom of an old house on Slauson Avenue in South Los Angeles. At the time, it was one of only a few Black-run bookstores in the city.

In the more than three decades since, the store has hosted luminaries including Muhammad Ali, Toni Morrison and Alice Walker. It has become a home for Black authors, a revered fixture of Los Angeles and a place that residents have turned to for guidance in moments of political upheaval.

“I’m just tired,” Fugate said on Monday while sitting in his office behind the store, which is now based in Leimert Park, a largely Black neighborhood in South Los Angeles. On the desk beside him was a stack of copies of “Black Marxism: The Making of the Black Radical Tradition” by Cedric J. Robinson. In a box beneath the desk were several copies of Ibram X. Kendi’s book “How to Raise an Antiracist.”

Fugate, who grew up in Detroit and is now 67, said his love of books was instilled in him from a young age. His mother would read Dr. Seuss to him and his brother. Every week, he would go to the local library. But after a lifetime in the book business, Fugate said, the time has finally come to retire.

Before opening Eso Won, Fugate spent several years running college bookstores. He would often sell the stores’ books at weekend community events. But eventually, he got frustrated; he wanted to create something that would put money back into the community and champion Black writers. “I felt uncomfortable,” Fugate said. “This should be a Black store.”

By the early 1990s, Eso Won had outgrown its premises on Slauson Avenue. Fugate and Hamilton moved the store to Inglewood. There, they hosted Elaine Brown of the Black Panther Party and Barack Obama, a little-known writer at the time who was on his book tour for “Dreams From My Father.”

“One of the only places that took me was Eso Won Books, back when nobody knew who I was and couldn’t pronounce my name,” the former president said in an interview last year with Fugate and Hamilton.

Presciently, he added: “In these coming dark times, we can scarcely afford to be without them.”

In 2020, following the murder of George Floyd, that need was palpable. Eso Won was inundated with customers. “That was the most unbelievable thing ever,” Fugate said. “In one day, we had over 1,000 orders,” he added. “People from all over the country were ordering books.”

But business has since slowed down, and Fugate said he and Hamilton plan to close the store by the end of the year. The men have received some proposals from those wanting to keep the store open, but Fugate said it was not likely that he would accept them.

Many are devastated, but Fugate said he believed that Eso Won’s closing would not leave the city bereft of Black-run bookstores.

Now, there are several in the city. “The world changed,” Fugate said.

“The Wind Wolves Preserve in southwest Kern County is 93,000 acres (yes, not a typo, 93,000) of private conservancy wild lands unknown to most people who live in Southern California yet open to the public free of charge for exploration, camping, picnicking, nature study galore and so much more.

Ecologically, it rises from the San Joaquin Valley lowlands up to the Transverse Range highlands. Spectacular in the late winter and early spring when myriad flowers are blooming, it offers great beauty and variety all year round. Many hiking trails are available, suitable for just about any fitness level.

And, no, there are no wolves there; the name refers to the wide-stretching grasslands there swaying in the winds. It is an amazing and generally uncrowded nature sanctuary worth visiting. Take food with you; it is quite isolated and no food is available, although water and restrooms are at the visitor center near the entrance. The entrance is about 15 minutes off I-5.”

And, before you go, some good news

By the 1980s, the California condor was on the edge of extinction — just 22 remained.

But thanks to decades of conservation work, the California condor population has rebounded to a couple hundred birds in Central California and Arizona.

Listen to the latest episode of “Short Wave” on NPR to learn more about the yearslong quest to return the birds to their ancestral skies and the importance of condors to the Yurok people — who call them Prey-go-neesh — and the natural world.

Thanks for reading. We’ll be back on Tuesday. Enjoy the long weekend.