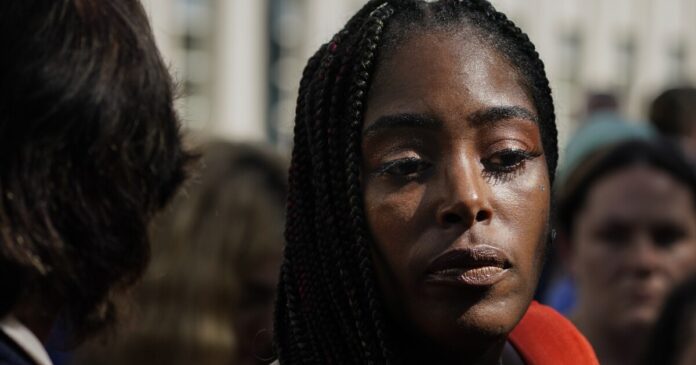 Jovante Cunningham is pleased with the 30-year prison sentenced handed down to singer R. Kelly in federal court in Brooklyn on Wednesday. She is also pleased to have her voice back, she said, after no one seemed to believe what she has been saying about the R&B artist for so long.

“Every victim has the right to tell their story. Give their account. Be heard, acknowledged,” she said Wednesday via Zoom from New York shortly after the sentencing. “So I’m excited to hear what’s going to happen and how our judicial system will continue to handle the justice process for us as victims.

“We are starting to see justice and we still have more litigation to go,” Cunningham said, referring to prosecutions involving R. Kelly still to come in Chicago and Minnesota.

After meeting R. Kelly when she was 14, Cunningham for “many moons” was a backup performer for the artist born Robert Sylvester Kelly. She participated in the docuseries “Surviving R. Kelly,” where she talked about witnessing the adult singer having sex with Aaliyah when the late R&B star was underage.

Cunningham said that over the years she’s been bullied and intimidated by R. Kelly’s fans, supporters and the like.

“I haven’t taken money from anyone. I’m doing this because it’s right.”

Now, she said, healing can begin, though she won’t know what that looks like until it’s complete.

“You know, the Bible says that what you do in secret, God will reward you openly,” Cunningham said. “He did all of this in secret, so now he gets rewarded openly.”

Cunningham’s attorney, Gloria Allred, who represented many of the victims who testified in the Brooklyn trial, said during the same video interview that many of the singer’s victims and witnesses were deterred “because there were so many attacks when they spoke their truth. Fears of retaliation and intimidation by fans, supporters of R. Kelly, vendors of R. Kelly.”

Sonja, another R. Kelly victim represented by Allred whose last name is not being used to protect her privacy, was among those who said she experienced intimidation from people in the singer’s sphere for years after awful events with him years ago in Chicago.

“I’ve been followed, I’ve been approached at networking events,” she said, also on the Zoom call. “It happened a few different times.” Each time, she said, she immediately got away from the person who was chatting with her and went “off the grid for a few days.”

Sonja was in her early 20s and interning at a radio station in Utah when she tried to snag an interview with Kelly, she said. He eventually said yes, but only if she would come to Chicago to talk to him. She flew there and was immediately locked in a hotel room for a few days, she said, then was finally fed something she had asked for off the hotel menu.

She took two bites and then didn’t remember how she got to a couch but said that when she came back around, Kelly was in the room with her and it was clear she had been assaulted.

“Before I left Chicago, I was told not to ‘f— with Mr. Kelly,’ that I wasn’t supposed to tell anybody,” Sonja said. “I never got my interview.”

After giving a victim impact statement in court and hearing Kelly’s sentence, Sonja said it finally felt like justice was being served.

“Thirty years is spot on for me,” she said about the sentence. “I have been enduring this for almost two decades. I am very happy with the sentence. Very happy.”

Earlier Wednesday, another victim represented by Allred spoke with reporters.

“This happened to me a long time ago. I was 17; I’m 45 today,” survivor Lizzette Martinez said outside the federal courthouse in Brooklyn. “I never thought I would be here to see him be held accountable for the atrocious thing he did to children.”

Martinez met Kelly at a mall in 1995 and was involved with him for four years, hoping for a singing mentorship but instead, she said, lost her virginity to him when she was underage. Physical, emotional and sexual abuse followed into 1999, according to her book, “Jane Doe #9.”

Of the sentence, she said, “I personally don’t think it’s enough,” according to the New York Times, “but I’m pleased with it.”

“I hope this sentencing serves as its own testimony that it doesn’t matter how powerful, rich or famous your abuser may be or how small they make you feel — justice only hears the truth,” Brooklyn U.S. Attorney Breon Peace said Wednesday in a post-sentencing news conference outside the courthouse.

Meanwhile, Kelly attorney Jennifer Bonjean told reporters outside the courthouse that her client “was prepared” for the sentence, had regrets and was sad.

Bonjean — who recently represented Bill Cosby in his civil trial with Judy Huth, which he lost — said Kelly was not “a predator” and added: “He disagrees with the characterizations that have been made about him.”

The Associated Press contributed to this report.

‘Everyone is dealing with a darkish future’: Afghans within the U.S....