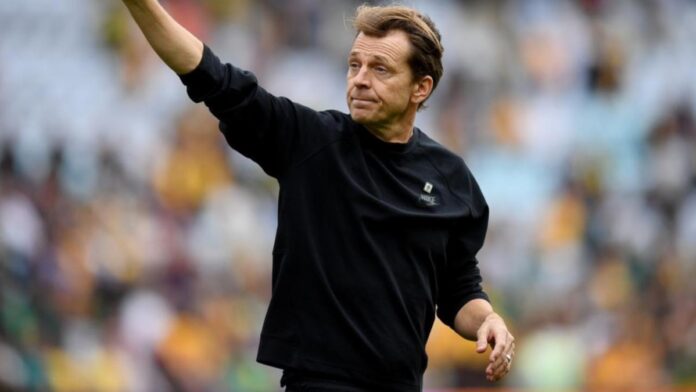 The Matildas mentor has been under the pump amid multiple lacklustre results, and the heat has exacerbated after a second-string team were thumped 7-0 by Spain.

Sam Kerr, Fowler, Caitlin Foord, Steph Catley and Alanna Kennedy were among the high-profile absences for the Spain thrashing and subsequent 1-1 draw with Portugal.

But, fresh off signing for Manchester City, Fowler threw her support behind the Swede and the decision to test fresh faces against Spain.

“Even if the results didn’t really go in our favour, I think it’s still important to give new players some experience at this top level because we do have a World Cup next year and we do need to give more players experience,” Fowler told AAP.

“But I think what’s important to understand is that the coach has a plan and we trust the coach and in his plan and two games don’t sum up our whole journey.

“We’ve still got a whole year until our World Cup and to best prepare for that, we have to make decisions that maybe seem strange to people outside of our bubble but it’s part of our plan and we have full belief in it.

“I definitely back Tony in all that he does. He’s been an amazing coach for me and his football brain is top-level.

“So I definitely back his plan leading into the World Cup.”

Just 24 caps into her national team journey, Fowler already shapes as one of the keys to the Matildas’ future success, and expected her four-year deal at City to help her reach new levels.

“Just knowing that I’m going to be in an environment that’s got everything I need to become a better player and fulfil the potential that I know that I have, that was enough alone for me to make the decision,” the 19-year-old said.

Fowler, a newly-announced Rebel Sport ambassador, was speaking at a store opening in Penrith as she enjoys her first leave back in Australia since the start of the coronavirus pandemic.

“It’s been really nice being back home in Cairns,” she said.

“It’s something that I cherish a lot because you never know when you have the opportunity to do these things again.”

Meanwhile, the Matildas have confirmed young midfielder Taylor Ray, who debuted against Spain, has ruptured her ACL.

It is the third ACL injury for the 21-year-old Sydney FC star.