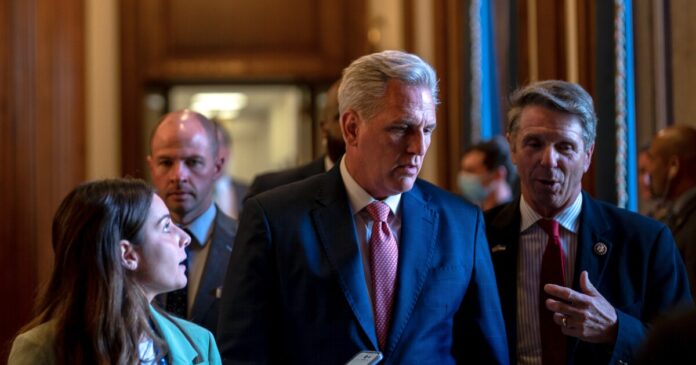 Hutchinson delivered bombshell testimony. Under oath, she recalled being told that Trump had attacked a Secret Service agent in an attempt to reach the Capitol on Jan. 6. Trump claimed her story was “fake,” “sick” and “fraudulent.”

“There is no cross-examination of this so-called witness,” Trump wrote on his social media platform, Truth Social. “This is a Kangaroo court!”

Although Trump’s post directly targeted Hutchinson, it was also an implicit criticism of House Minority Leader Kevin McCarthy (R-Bakersfield). Trump has repeatedly blamed McCarthy for allowing Democrats to create a select committee with seven Democrats and only two Republicans, both of whom were chosen by House Speaker Nancy Pelosi (D-San Francisco).

McCarthy pulled all his members from the panel after Pelosi rejected Reps. Jim Jordan (R-Ohio) and Jim Banks (R-Ind.), allowing Democrats to assemble a panel that has used its subpoena power, combined with live testimony and recorded depositions, to present a largely unchallenged narrative of Trump’s efforts to overturn the results of the 2020 election. Republicans who disagree with the committee’s story have been forced to resort to social media posts and press releases, rather than in-person questioning. So far, though, rank-and-file Republicans have stood by McCarthy’s decision — in public, at least — and instead faulted Pelosi for the lack of GOP representation on the committee.

McCarthy told Fox News this week that he made the “right decision” and that he and Trump are “all good.”

Tuesday’s hearing also highlighted some of McCarthy’s actions on the day of the attack.

Hutchinson told the committee she received a call from McCarthy on Jan. 6 after Trump announced he was going to the Capitol during a rally on the Ellipse. The committee showed texts she sent to Tony Ornato, Trump’s deputy chief of staff. “Mccarthy just called me too,” one message read. The other quoted McCarthy asking, “Do you guys think you’re coming to my office?”

Hutchinson told the committee she was in a tent behind the stage when the call came in, noting that “when you’re behind the stage, you can’t really hear what’s going on in front of you.”

“So when Mr. McCarthy called me with this information, I answered the call and he sounded rushed, but also frustrated and angry at me,” Hutchinson said. “I was confused because I didn’t know what the president had just said.”

McCarthy told her: “The president just said he’s marching to the Capitol,” she testified. “You told me this whole week you aren’t coming up here. Why would you lie to me?”

“Well, he just said it on stage, Cassidy,” McCarthy shot back, according to her testimony. “Figure it out. Don’t come up here.”

“I said I’ll run the traps on this, and I’ll shoot you a text,” Hutchinson said. “I can assure you we’re not coming up to the Capitol. We’ve already made that decision.”

“He pressed a little bit more, believing me but, I think, frustrated that the president had said that,” Hutchinson added of McCarthy, “and we ended the phone conversation after that. I called Mr. Ornato to reconfirm that we weren’t going to the Capitol, which is also in our text messages. I sent Mr. McCarthy another text telling him in the affirmative that we weren’t going up to the Capitol and he didn’t respond after that.”

That anecdote indicates how vehemently the top House Republican wanted the president to steer clear of the Capitol on a day when dozens of House Republicans were set to oppose certification of Joe Biden’s electoral college win.

On Jan. 2., days earlier, Meadows had cautioned Hutchinson that “things might get real, real bad on Jan. 6,” she testified.

The White House counsel, Pat Cipollone, had also warned Hutchinson before the rally on the morning of Jan. 6 to “please make sure we don’t go up to the Capitol,” she told the committee.

“We’re going to get charged with every crime imaginable if we make that movement happen,” Cipollone told Hutchinson.

Global COVID-19 decline ‘should be interpreted with caution’: WHO – National...