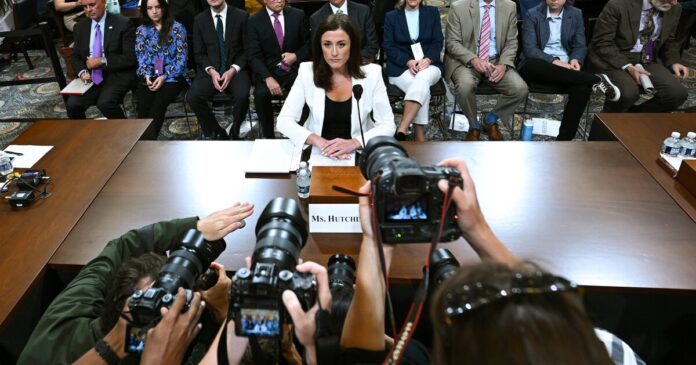 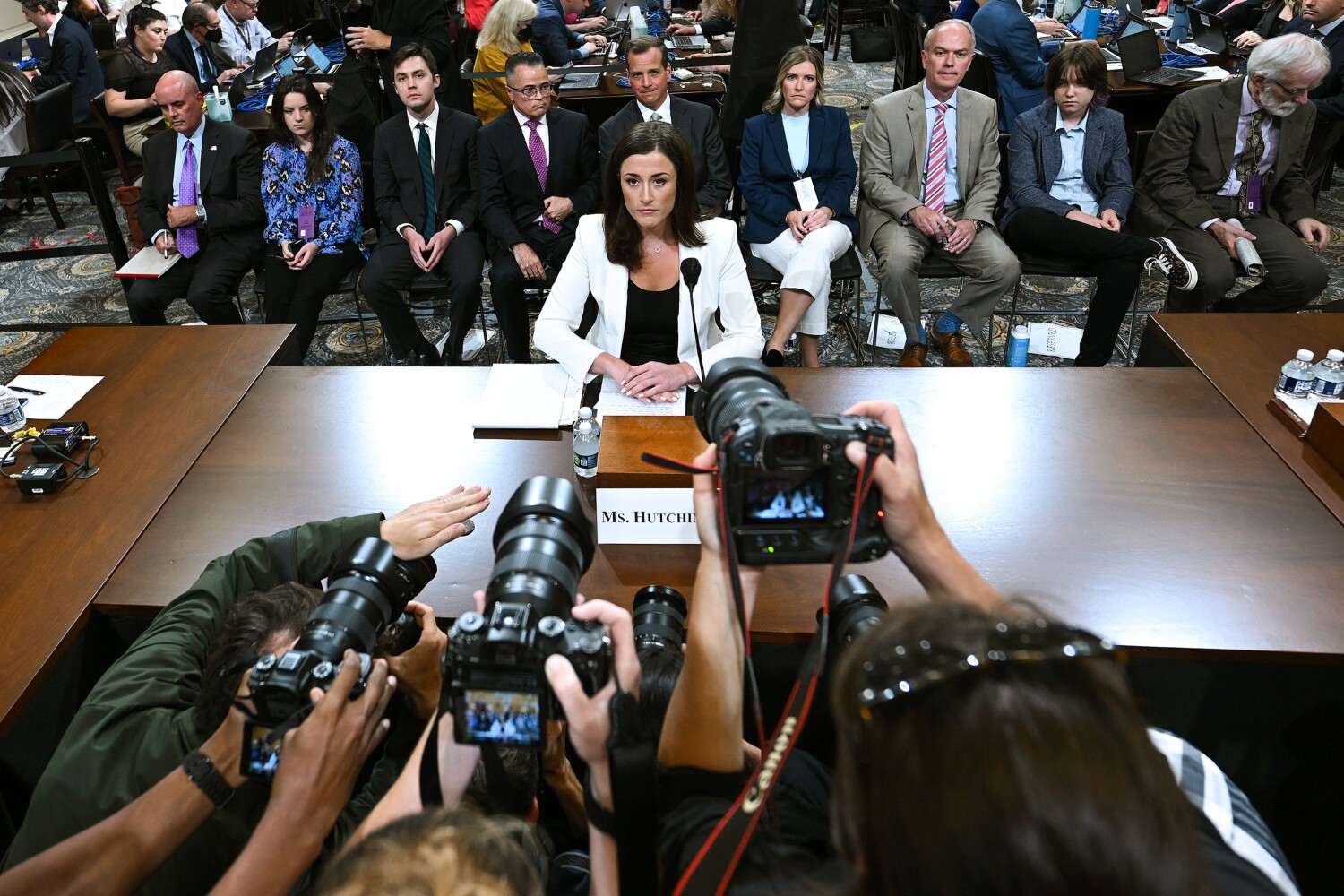 In testimony before a House panel Tuesday, former White House aide Cassidy Hutchinson outlined a stunning series of events surrounding the Capitol insurrection on Jan. 6, 2021, including an account that then-President Trump lunged at a Secret Service agent in a desperate bid to travel to the Capitol after his speech that day.

Hutchinson revealed that White House officials knew about the risk of violence on Jan. 6 in the days prior to the attack, and testified that Trump knew supporters at his rally were armed, wanted them to bypass security and was still determined to go to the Capitol with them after his speech, despite concerns raised by his advisors.

“Please make sure we don’t go up to the Capitol,” White House Counsel Pat Cipollone told Hutchinson on the morning of Jan. 6. “We’re going to get charged with every crime imaginable if we make that movement happen.”

Here are some of the bombshell revelations from the hearing and Hutchinson’s testimony:

Several Trump aides knew the risk of violence before Jan. 6

The Department of Justice and the Secret Service were aware of security concerns about Trump’s supporters targeting the Capitol. The Secret Service’s intelligence division sent messages to Robert Engel, the head of Trump’s security detail, and Tony Ornato, the former deputy chief of staff for operations, who handled security.

Ornato told Meadows on the morning of Jan. 6 that police had confiscated weapons, including guns and flagpoles, from people attending the president’s rally.

Hutchinson said that Meadows appeared uninterested and didn’t look up from his phone when he received the news, saying: “All right, anything else?”

Ahead of his Jan. 6 speech near the White House, Trump expressed anger that the secure area surrounding the stage was not full of people, Hutchinson said. Ornato said that several of the president’s supporters did not want to go through the “mags,” or magnetometers, to be screened because they did not want to have their weapons confiscated.

“I don’t f— care that they have weapons. They’re not here to hurt me,” Trump said, according to Hutchinson. “Let my people in. They can march to the Capitol from here. Let the people in; take the mags away.”

Trump went on to urge his supporters to march to the Capitol and said he would join them.

Eric Herschmann, a former senior advisor to Trump, said that it would be “foolish” for the former president to include certain lines in his speech, Hutchinson said. Those sections included language about fighting for Trump, going to the Capitol and references to then-Vice President Mike Pence.

Herschmann and the White House counsel’s office urged speechwriters not to include those lines “for legal concerns and also for the optics of what it could portray the president wanting to do that day,” she said.

Trump wanted to go to the Capitol on Jan. 6

In his 2021 book, “The Chief’s Chief,” Meadows wrote that Trump was speaking metaphorically when he said he wanted to go to the Capitol with his supporters on Jan. 6. But Hutchinson testified the president was serious and that it was discussed in the days prior to the insurrection.

On the evening of Jan. 2, after Trump lawyer Rudolph W. Giuliani met with Meadows at the White House, he told Hutchinson: “We’re going to the Capitol. It’s going to be great. The president’s going to be there, he’s going to be powerful … talk to the chief about it, he knows about it.”

Hutchinson said she followed up with Meadows, who told her “things might get real, real bad on Jan. 6.”

Prior to that meeting, Hutchinson said she felt “apprehensive” about Jan. 6.

“That evening was the first moment that I remember feeling scared and nervous for what could happen,” she said.

Hutchinson said there were discussions about Trump giving another speech outside the Capitol or going into the House chamber.

Cipollone urged Hutchinson to make sure the president did not go to the Capitol, stating that he was worried it would lead to charges of obstructing justice, inciting a riot and defrauding the electoral count.

Other aides, including former Trump assistant Nick Luna, also testified in video depositions that Trump wanted to go to the Capitol.

Trump lunged for limousine steering wheel to go to Capitol

After the president and his staff returned to the White House, Ornato pulled Hutchinson aside into a room with Engel.

Ornato told her that Trump had a “very strong, very angry response” when Engel told him they would not be going to the Capitol.

“The president said something to the effect of ‘I’m the f— president, take me up to the Capitol now,’” she said.

Things escalated from there.

“The president reached up toward the front of the vehicle to grab the steering wheel. Mr. Engel grabbed his arm,” she said. “Mr. Trump then used his free hand to lunge toward Bobby Engel.”

Hutchinson said Engel was in the room while Ornato relayed the story, and did not dispute it.

Trump didn’t want to take action to stop the riot on Jan. 6

Hutchinson said there were three ideological camps within the White House when it came to responding to the insurrection: One group wanted immediate action, one group knew they needed to act but also wanted to placate Trump, and one group wanted to “deflect and blame” and point the finger at antifa activists.

She said Meadows was in the deflect-and-blame group but eventually took on a more moderate stance.

About 2 p.m on that day, as rioters swarmed the Capitol, Hutchinson said she went into Meadows’ office, where he was on his cellphone. She asked him whether he’d talked to the president about what was happening.

A few minutes later, Cipollone went to Meadows’ office and said they needed to see the president immediately. Meadows told him, “He doesn’t want to do anything.”

Cipollone said: “Something needs to be done or people are going to die and the blood’s going to be on your f— hands.”

After Meadows and Cipollone met with the president, Cipollone said they needed to do more to stop the attack on the Capitol, especially with rioters chanting they wanted to hang Pence.

“You heard him, Pat, he thinks Mike [Pence] deserves it,” Meadows said, according to Hutchinson.

Trump later tweeted that Pence didn’t have the “courage to do what needed to be done.”

After former Atty. Gen. William Barr told the Associated Press that the Department of Justice had found no credible evidence of widespread voter fraud, Trump threw his lunch against the wall.

“The valet had articulated the president was extremely angry at the attorney general’s AP interview and had thrown his lunch against the wall,” she said.

Trump and Meadows wanted to include pardon language in Jan. 7 speech

On Jan. 7, President Trump delivered a brief, on-camera address condemning the previous day’s Capitol attack. According to Republican Rep. Liz Cheney of Wyoming, the vice chair of the committee, Deputy White House Counsel Pat Philbin wrote a draft of the speech the morning of Jan. 7, which he shared with Cipollone, who approved it.

Trump initially resisted giving a speech, but was convinced by a group of people that included his daughter Ivanka, her husband, Jared Kushner, Herschmann, Cipollone, Philbin and Meadows. Part of the argument in favor of the speech was concern over the possibility Trump’s Cabinet would attempt to use the 25th Amendment to remove him from office.

Trump rejected lines about prosecuting rioters and wanted to include language about offering pardons. Hutchinson said Meadows was also supportive of pardon language. She said that both he and Giuliani sought pardons.

More than 30 reported killed, bodies set on fire in Myanmar...