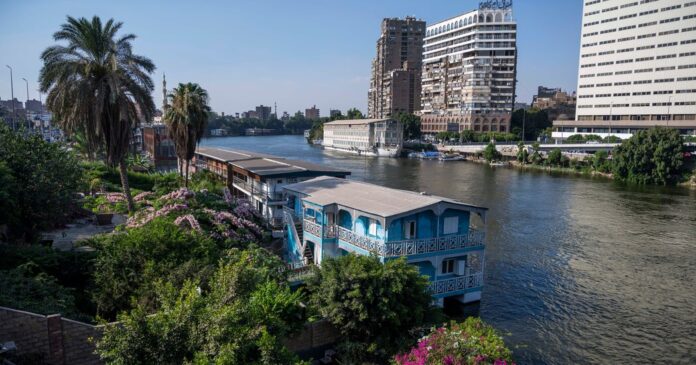 CAIRO — Rowing up to the cheerful turquoise houseboat on the Nile, a fisherman saluted the white-haired woman swaying on its deck.

“How are you holding up?” he called to the woman, Ekhlas Helmy, 88, as his wife dragged back the oars. “May God bring down the bully!”

This week may be their last sharing that particular stretch of the Nile, a narrow tract in central Cairo that, since the 1800s, has been lined with wooden houseboats — homes that double as living lore. This month, the government suddenly ordered Ms. Helmy’s houseboat and 31 others demolished, saying they were unsafe and unlicensed.

More than half of the 32 structures, connected to mainland Cairo by lush riverbank gardens, have already been destroyed or towed away for scrap, with at least 14 of them disappearing on Tuesday alone. The rest, including Ms. Helmy’s, are slated to go by early July.

With them will fade the remnants of a glittering, fast-disappearing history. Divas hosted debauched salons on them. The Nobel laureate Naguib Mahfouz wrote a novel on one, and famous films were set on others. On the riverbank, life was peaceful, airy and private, nothing like the dusty, frenzied metropolis whose imagination the floating homes had captured for so long.

“I was born on a houseboat, and I can never be away from the Nile,” said Ms. Helmy, her pink toenails as bright as her turquoise houseboat, which she and her husband built about 20 years ago. Born and raised a few houseboats down, she briefly moved into an apartment when she married, but soon hurried back to the river.

“I’d die if I had to live in a real apartment,” she said. “How could you imprison me between four walls?”

Though the government has offered little information about its plans for the riverbank, residents say the authorities have increasingly pushed in recent years to replace residential boats with floating cafes and restaurants. That is in line with government plans to modernize — and monetize — much of Cairo by handing it over to private developers or the military, bulldozing several historic neighborhoods to build new high-rises, roads and bridges.

But even in a country where the heavy hand of the state often comes down on ordinary citizens without warning, the houseboats have disappeared with disquieting speed.

For decades, successive Egyptian rulers have tried to move the houseboats, but the owners were able to negotiate with the authorities. Over the past five years, the government has raised fees or changed the regulations several times, residents said, and finally stopped renewing or issuing houseboat licenses two years ago.

A letter sent to residents last year indicated that the government would issue new licenses only to commercial boats. Still, prior experience made residents hopeful for a reprieve.

Now, officials are using the lack of licenses to justify the demolitions, even though, residents say, they refused to renew those licenses.

“They are just sitting there without any safety system,” Ayman Anwar, the head of the Central Administration for Nile Protection, said in a television phone-in on Monday, warning that the boats could sink, hit something and kill residents. “They do not have licenses from a single government authority.”

He also suggested that one of the residents was affiliated with a political opposition movement, in what residents said was a bid to blunt public sympathy. Mr. Anwar did not respond to a call seeking comment.

“It’s kind of been brewing, but I never thought it would actually, actually happen,” said Ahdaf Soueif, a novelist from a prominent family of Egyptian intellectuals and dissidents who last week received a demand for nearly $50,000 in back licensing fees along with the demolition order.

“I mean, things have been run one way for 40 years,” she said, “and now they’re turning around and saying this is illegal.”

Ms. Soueif bought and fixed up her cream-colored houseboat a decade ago, thinking it would be her last home.

“They’re a kind of romantic dream,” she said. “They’re so much a part of the heritage of Cairo, it was odd to be told you could just buy one of them.”

The heritage they represent is not necessarily the kind the government wants advertised, which may explain why the authorities, in justifying the demolitions, recently hinted that the houseboats were used for “immoral” purposes.

Since the early 1800s, when rich, high-ranking Ottoman officials known as pashas were said to have used their houseboats to rendezvous with their mistresses, the boats have radiated a kind of louche, half-light glamour.

Set apart from Cairo’s hurly-burly, they were private spaces floating in plain, tantalizing sight, offering some Cairenes a refuge where they could drink, drug and mix freely in the heart of a deeply conservative city.

Outsiders got a glimpse in the novels of Mr. Mahfouz, who owned a houseboat near his apartment.

In “Adrift on the Nile,” disaffected Cairenes gather on a houseboat to smoke hashish and discuss the hypocrisy of the times; in the famous “Cairo Trilogy,” the stern family patriarch frequently spends his evenings with friends on a houseboat, enjoying the company of the fictional singers Jalila, Zubayda and Zanuba.

According to the local lore, government cabinet meetings used to take place on a houseboat owned by Mounira al-Mahdia, a celebrated 1920s diva. The houseboat of another singer, Badia Masabni, was said to be so popular among Cairo’s elite that a rumor spread at the time that governments were formed aboard.

Back then, there were at least 200 houseboats up and down the Nile. But under President Gamal Abdel Nasser, many of the structures were moved to clear the river for water sports, said Wael Wakil, 58, who was born and raised in the houseboat he still lives on.

That left about 40 boats moored where they sit now, next to Kit Kat, a neighborhood named after a local World War II-era nightclub popular among Allied soldiers.

During the war, British officers commandeered many of the houseboats. The Hungarian desert explorer Count Laszlo Almasy, made famous in “The English Patient,” was said to have installed a pair of German spies on one houseboat in the area — with the help, in some tellings, of a belly dancer.

Over the years, more and more houseboats were converted into businesses, and the banks of the Nile, once largely open to the public, became crowded with private clubs and cafes.

The authorities have made clear that they want more of those: The houseboat owners say they have been told that they can pay more than $6,500 to temporarily dock elsewhere while they apply for commercial licenses to open cafes or restaurants in their former homes. But that, they argue, is hardly a fair or attractive option.

Today, some of the houseboats are owned by politicians and businessmen, others by bohemians, still others by middle-class Egyptians who know no other life.

Mr. Wakil said his family moved to their houseboat in 1961. He remembers growing up fishing off its deck. Whenever he dropped a toy in the Nile, he said, a passing boatman would rescue it.

Now Mr. Wakil, a retired finance manager, has packed up, and is getting ready to move to an apartment his wife owns in the desert.

“But nothing will come close to compensating for this,” he said.

From Ms. Soueif’s favorite place in the house, the dressing room where she gives her grandchildren baths, she can see a mango tree in her riverbank garden that has not fruited for four years. Suddenly, this year, it produced what promises to be a bumper crop.

But this type of mango cannot be picked before mid-July. By then, if nothing changes, she and her houseboat will be gone.

Bourla: Netanyahu fought for vaccines as a result of it helped...

The inside story of one man’s five-year ordeal in an Iranian...