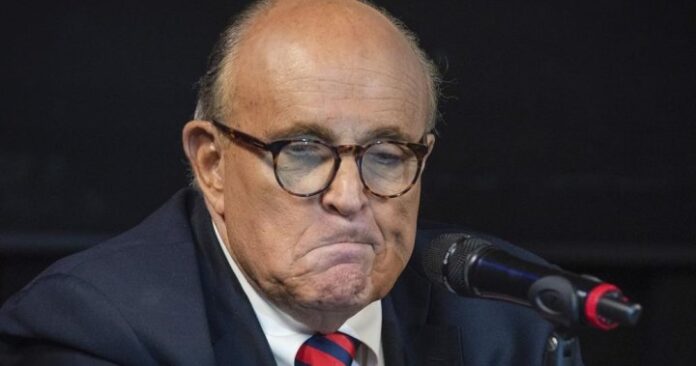 Rudy Giuliani’s alleged assaulter had his charges downgraded late Monday after video footage was released that showed the moment the former New York mayor was slapped on the back by the grocery store worker, raising doubts about the severity of the blow.

Daniel Gill, 39, a worker at ShopRite, was initially charged with second-degree assault for hitting Giuliani on the back at the Staten Island grocery store while he was campaigning for his son Andrew’s gubernatorial bid in New York.

Gill was released from police custody after more than 24 hours on his own recognizance on Monday. He is scheduled for his next court day on Aug. 17.

Gill is being represented by the Legal Aid Society, which claims that Giuliani exaggerated the encounter with their client in order to drum up press.

“Our client merely patted Mr. Giuliani, who sustained nothing remotely resembling physical injuries, without malice to simply get his attention, as the video footage clearly showed,” Legal Aid said in a press release.

‘Too much mayonnaise’ — Subway worker shot to death after sandwich argument

According to the New York Police Department, Gill allegedly said “What’s up, scumbag,” to Giuliani after hitting him.

Legal Aid claimed that Gill was “followed and threatened” by one of Giuliani’s aides who “allegedly poked Mr. Gill in the chest and told him that he was going to be ‘locked up.’”

“Given Mr. Giuliani’s obsession with seeing his name in the press and his demonstrated propensity to distort the truth, we are happy to correct the record on exactly what occurred over the weekend on Staten Island,” the statement concluded.

After the slap on the former lawyer of Donald Trump, Gill was immediately arrested and Giuliani called for him to be fired and prosecuted, characterizing the slap as feeling like “a shot on my back, like somebody shot me. I went forward, but luckily I didn’t fall down.”

Giuliani claimed that the blow could have killed him.

“I mean, suppose I was a weaker 78-year-old and I hit the ground, cracked my skull and died,” he told radio show host and former New York mayoral candidate Curtis Sliwa.

However, video footage obtained by the New York Post from inside the supermarket — which can be seen in the clip posted to Twitter below — shows a different chain of events than the violent assault described by the former mayor.

Video of the “assault” on Rudy at ShopRite, where Rudy had the person arrested, and said if he wasn’t in better shape he would’ve fallen, cracked his skull, and died. pic.twitter.com/EpgSpPu2fk

As seen in the surveillance footage, a man approached Giuliani from behind and slapped his back. Giuliani remained upright and pointed at the man but did not lurch forward as he claimed.

Giuliani told NBC News on Monday that he would consult a doctor about the blow, claiming to The New York Times that it left red marks on his back. Police told NBC News that Giuliani did not require medical attention at the time of the incident.

After hearing about Gill’s charges being downgraded, Giuliani was displeased and called the video footage of the incident “deceptive,” as reported by The Hill.

“People around me helped me. People around me secured the person who did it,” he recounted. “The videotape that you see probably is a little deceptive because it just shows that hand on my back.”