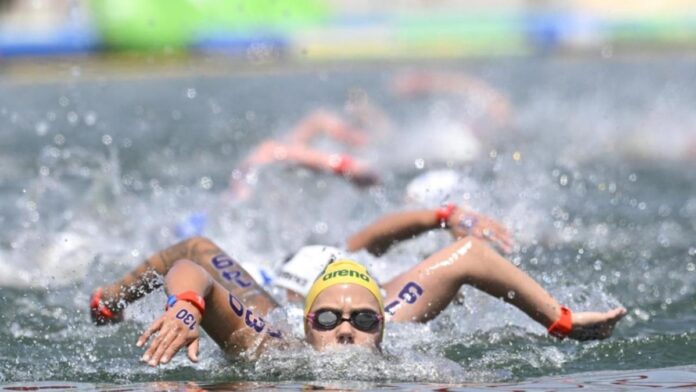 Australians have finished out of the medals on the 11th day of the world aquatics championships in Budapest.

In the men’s 5km open water race, Kyle Lee came eighth of 64 entrants in 54 minutes 28.2 seconds and Nicholas Sloman 10th, as German Florian Wellbrock dominated to take the title in 52:48.80.

It was Wellbrock’s fourth medal of the championships, coming less than 24 hours after anchoring Germany’s mixed 4x1500m team relay to gold in the pool.

There was another eighth place in the women’s 5km as Moesha Johnson took that spot behind winner Ana Marcela Cunha, of Brazil. Australian Finella Gibbs-Real was 26th of the 51 competitors.

Johnson led from before the 400m mark to beyond the 1500m and was fourth as late as 3.2km before being overhauled.

In the water polo, Australia lost their men’s round match 17-6 to Italy.

They now face a 9th-12th classification match against Japan on Wednesday.

Australia are fourth in the overall medal standings as China’s prowess in the diving events takes effect.