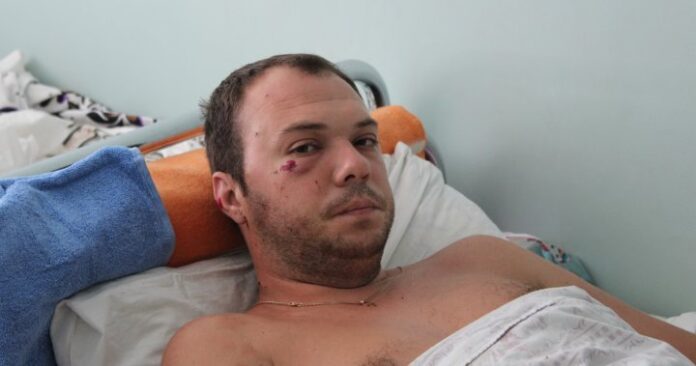 On Tuesday, the 33-year-old electronics store employee lay in a hospital room in Kremenchuk, bandaged and shaken by the close call.

“I know I managed to survive only by some kind of miracle,” he told Global News before politely asking to be left alone to rest.

Eighteen are confirmed dead and 21 have been reported missing in the Monday afternoon attack. Another 59 sought help at local hospitals with injuries.

Russia ramps up attacks on Kharkiv

Four months after invading Ukraine, Russia has stepped up missile and rocket attacks in recent days, apparently in response to its growing isolation.

Nine were killed and 32 injured by Russian attacks in nearby Kharkiv, Ukraine’s interior minister said. A missile strike in Kyiv on Sunday killed one.

The mall attack is among the worst since Russia fired a cluster bomb at a crowded railway station in Kramatorsk on April 8, killing 59 and injuring 110.

Air sirens sounded between seven to 10 minutes before the X-22 cruise missile hit the mall at about 5 p.m, allowing many to seek shelter nearby.

The explosion set off a fire that completely gutted the mall, and likely killed any survivors waiting to be rescued in the rubble.

“We will never forget this crime,” Ukraine’s Minister of Interior, Denys Monastyrsky, told reporters after touring the smouldering mall.

He said the attacks had clearly targeted civilians since there are no Ukrainian military facilities within five kilometres of the mall.

About 1,000 rescue workers were at the scene Tuesday, searching the debris for bodies. Fragments of the missile were displayed on a table.

“This is like a crime against humanity, an act of terrorism by the Russian Federation,” said Dmitry Lunin, head of Poltava Regional Military Administration.

“It’s a totally civilian object, where peaceful civilians did their shopping and received services,” he told Global News in an interview at the scene.

“It’s no doubt it’s a war crime,” said Irena Venediktova, the Prosecutor General of Ukraine. “I am sure that Russians know very well that they are just killing civilians.”

The attack came a day before Constitution Day,

Outside the hospital in Kremenchuk, about 300 kilometres southwest of Kyiv, the director said the wounded ranged in age from 20 to 66.

Injuries ranged from hand and leg amputations to burns to hand and foot wounds, said the director, who asked not to be identified.

One person died an hour after being admitted to hospital. Another of those hospitalized was an emergency worker.

After visiting a colleague at the hospital, Sasha said he worked at a mobile phone shop at the mall and was making a call when the missile hit.

“I had a call to my friend,” the 19-year-old said. “I managed to say to him only hello and after that behind me the huge explosion happened.”

Because he was standing close to the front entrance, he was able to run outside. About 25 minutes passed before the fire erupted, he said.

He said he received an air raid alert on his phone and shoppers were still leaving to seek shelter when the attack happened.

He said he was uncertain about the fate of some of his co-workers. “I know people we can’t find at the moment,” he said

An employee at the Eldorado electronics shop, Oleksandr said everything went dark after the explosion and he crawled out through the smoke.

He said he was praying to God to stop the Russians. “I hate them so strongly,” he said. “How many kids have died there?

How this UAE household spends lower than Dh700 per 30 days...