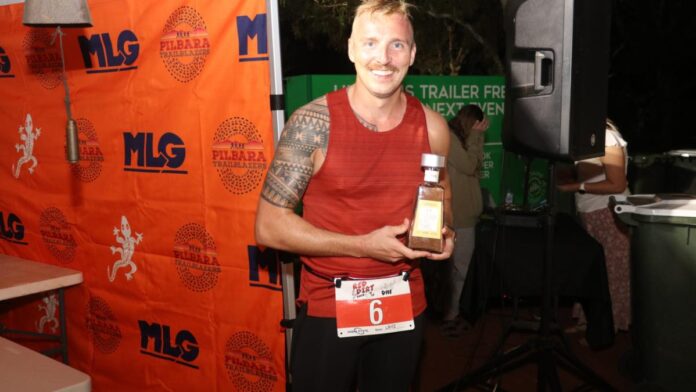 Levi Winman outlasted 34 other runners over 12 gruelling hours to be crowned the last man standing at the inaugural Red Dirt Backyard Ultra.

The Red Dirt Backyard Ultra, held on Saturday, June 25 near the Balmoral Road caravan park involved competitors running a 6.7km course every hour for 12 hours with the winner having completed a total of 80.4km.

The event was organised by Pilbara Trailblazers, a running club formed in 2021 to give Pilbara residents more opportunities to participate in running events.

The field steadily thinned as runners rang the DNF bell after completing as many laps as they could until there was just Jacs Hoffman, Winman and Ben Lyon left at the 10-hour mark.

Hoffman DNF’d after completing an exhausting 11 laps leaving just Winman and Lyon to battle it out over the final lap.

The pair got off to a fast start with Lyon upping the pace out of the gate, but Winman was able to push ahead and cross the finish line first to be the last man standing.

Winman said he was struggling before the start of the last lap.

“Ben put some pace down at the start, I thought I would just up the pace and see how far I could push it,” he said.

Winman said he wore bib No.6 in support of his mum who is battling cancer in the UK.

“Not a lot of people know the meaning of number six for me, it’s my mum’s birthday. She’s been fighting cancer for probably about six years now. So I when I wear number six, it just kind of pushes me,” he said.

He said he used the motto “one more lap” to push through the pain barrier during the 12 hours.

He said he previously had run 72km as part of an eight-hour ultra marathon for veterans but was beaten on the day by a 65-year-old.

“It was good to get a win, but just stay humble because I could go to another event and get beat,” he said.

The next running event by the Pilbara Trailblazers is a run festival series held in conjunction with Karratha’s annual FeNaClNG Festival on July 30 that will include a 5km, 10km and half-marathon options.

The Misplaced Days of Raúl Jiménez

No plan to down Chinese language rocket particles: US

How Hillsong’s Houstons went from Baulkham Hills to Beverly Hills