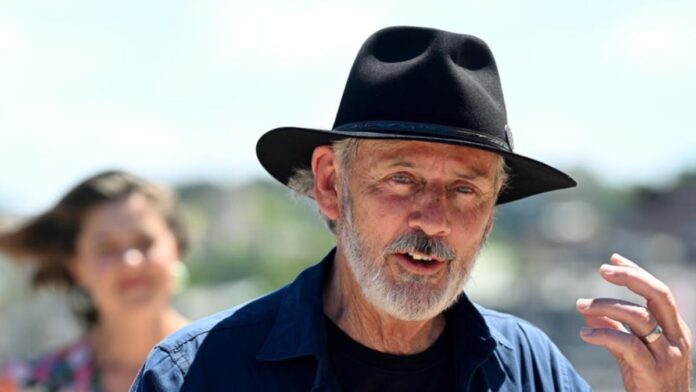 When the iconic Australian band Goanna played its first sold out show in Cairns in 1983, Indigenous fans had to be smuggled in to the gig through the stage door.

“Even if Aboriginal people were dressed in a three piece suit, they’d be stopped at the door and rejected because of the dress code, that was how systemic racism worked in those days,” lead singer Shane Howard told AAP.

When the band played another sold-out show in Cairns on Saturday, things were very different, with the Minjil clan welcoming the audience to country, and Indigenous performer David Hudson joining them onstage for the hit song, Solid Rock.

The level of empowerment for Aboriginal Australians has palpably changed in the past four decades, according to Howard.

“It feels again like it did in the early 1980s, the era of Australian self confidence, where change comes in a surge,” he said.

Goanna’s hit song Solid Rock, which Howard wrote on a camping trip to Uluru in 1981, may have had a small hand in that progress.

The first commercial song ever to use a didgeridoo, and arguably the first to bring mainstream attention to genocide and land rights, it reached number one on the music charts and sold 500,000 copies.

The song is widely regarded as an Australian classic, and Howard was invited to play it at the closure of the Uluru climb in 2019.

“Solid Rock is such a tower, such a monolith… I am really deeply proud of it, I’m proud that I was brave to write it,” he said.

But when it was first released, its success meant Goanna was suddenly caught up in the conflicting worlds of Indigenous politics and commercial music, while a relentless touring schedule also took a toll, according to Howard.

“In the wake of that, we had a very hard landing, a crash landing really, and things got pretty broken,” he said.

So coming up to the 40 year anniversary of their debut album Spirit of Place, Howard felt the band still had unfinished business.

In 2021 music promoter Brian Taranto organised a get-together in Geelong in a room at the Old Paper Mills, where Goanna had rehearsed in 1978, and the musicians knew within a few minutes that the old chemistry was still there.

Hitting the road again for their Celebrating 40 Years of Spirit of Place tour, the band’s core trio of Howard, Rose Bygrave, and Marcia Howard have been joined by the original guitarist from the album, Graham Davidge.

“All the personality differences we had 40 years ago will still be there today, but we’re older and wiser and we laugh at ourselves, we’re able to kind of let all that go,” Howard said.

In the 1980s, the band would pack all of their possessions and sound gear into a bus, and play six nights a week for six weeks straight.

They are taking it a bit easier this time, making sure to involve local Aboriginal communities and musicians in their shows.

Howard said while there has been progress since the time of Solid Rock, there is still a long way to go, with the unfinished business of a treaty, chronic health issues in remote communities, and an epidemic of youth incarceration.

Howard is encouraged, however, by the federal government’s commitment to the Uluru Statement from the Heart.

“The words are right, the rhetoric is right, we’re judged by our actions and we’ll see how that plays out.”

Goanna will tour Queensland and the NT before a longer run of shows in the southern states towards the end of 2022.

Finals on the road in crunch AFL derby