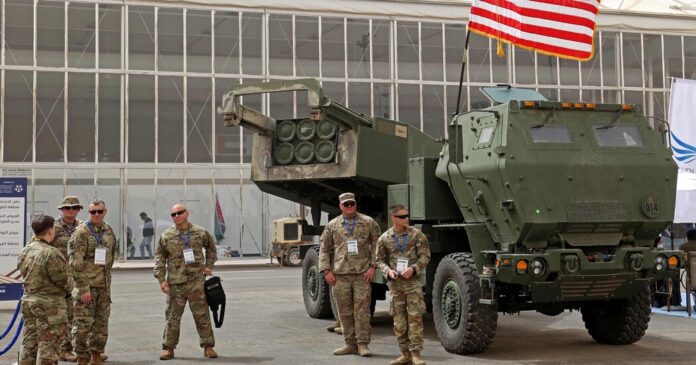 WASHINGTON — The White House authorized on Thursday an additional $450 million in military aid for Ukraine, which is set to receive four more rocket artillery launchers that the government in Kyiv has said are needed to repulse Russian troops in Donbas.

The latest announcement brings the total amount of military aid from the United States to Ukraine to $6.8 billion since the beginning of the Biden administration — the vast majority of which has been committed since Russia’s invasion of Ukraine on Feb. 24, according to a Pentagon statement emailed to reporters shortly after the White House briefing.

The truck-mounted launchers, called the M142 HIMARS — for High Mobility Artillery Rocket System — carry six guided rockets in a disposable “pod” that can be quickly discarded after the munitions are launched, allowing the vehicle’s three-person crew to quickly winch a new fully-loaded pod into place.

The rockets typically carry a 200-pound high-explosive warhead to targets as far as 43 miles away, and can strike within about 30 feet of their programmed aim point.

The combination of HIMARS launchers and the guided rockets they fire is a qualitative leap ahead for Ukrainian artillery capabilities, which previously operated only Soviet-designed artillery rocket systems that are unguided and far slower to reload. Hours earlier Thursday, Ukraine’s defense minister, Oleksii Reznikov, announced on Twitter that the first group of HIMARS trucks, from a Pentagon shipment announced in late May, had arrived in his country.

The Pentagon’s inventory of the latest aid includes 36,000 rounds of 105-mm artillery ammunition, suggesting Ukraine has acquired yet another NATO-standard artillery system that would use it. It was not immediately clear which country had supplied Ukraine with the howitzers to fire them.

Vaccinated Vacationers Will Be Allowed to Go to, E.U. Says

Teachers across France stage a one-day walkout over Covid rules.