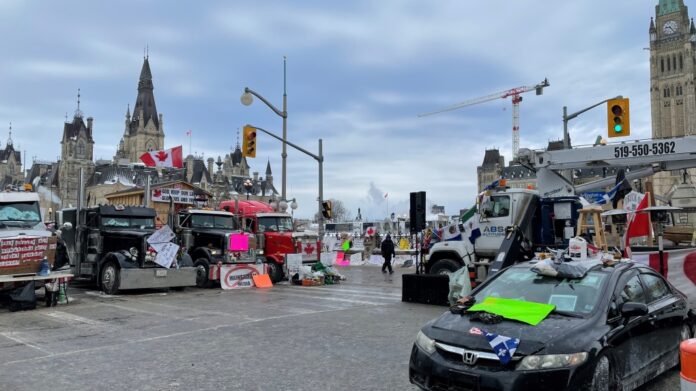 
Four months after the last truck left downtown Ottawa, top Freedom Convoy figures returned to Parliament Hill and met with nearly 20 per cent of the Conservative Party of Canada caucus, according to video reviewed by CTV News.


The presentations included extensive anti-vaccine and anti-mandate speeches from Alexander, as well as a discussion from Topp on a group he has founded called the Canadian Citizens Coalition. The stated mission of the coalition is to “return Canada to a free, fair and just society by restoring democratic, representative and responsible civic and corporate government.” The coalition is associated with various anti-vaccine and anti-mandates groups, including ones that Marazzo and Bulford are members of.


Once the presentations were completed, Ontario MP Cheryl Gallant and Saskatchewan MP Jeremy Patzer made statements to the room. Patzer said the group had “allies” in the Conservative party, adding “you have support, you’ve had support all along.”


Many Conservatives, including Ontario MPs Ryan Williams and Alex Ruff, posed for photos with Topp and Marazzo at the end of the first presentation. Marazzo said they are not aligned with any party federally, “but we are very aware of which members of which party attended today.”


Marazzo routinely was the public face of the convoy with the media, holding press conferences and posting videos relaying the messages from the convoy organizers. On Feb. 8, Marazzo spoke in a video alongside organizers, including Tamara Lich, proposing a meeting with the Governor General to enter into a coalition government with the Conservative Party, NDP and Bloc Quebecois, despite that proposal being widely viewed as a non-starter attempt to unseat the current Liberal government.


Interim Conservative Leader Candice Bergen’s office said they were aware of the event, but were not involved in organizing it.


Topp is scheduled to return to Ottawa on June 30, where he will complete his march by touching the Tomb of the Unknown Soldier. Topp’s return is expected to coincide with further protests against the government on Canada Day.

Prince Philip ‘had early and real curiosity in conservation’

Dad, neighbours scramble to save lots of children throughout Mill Woods...