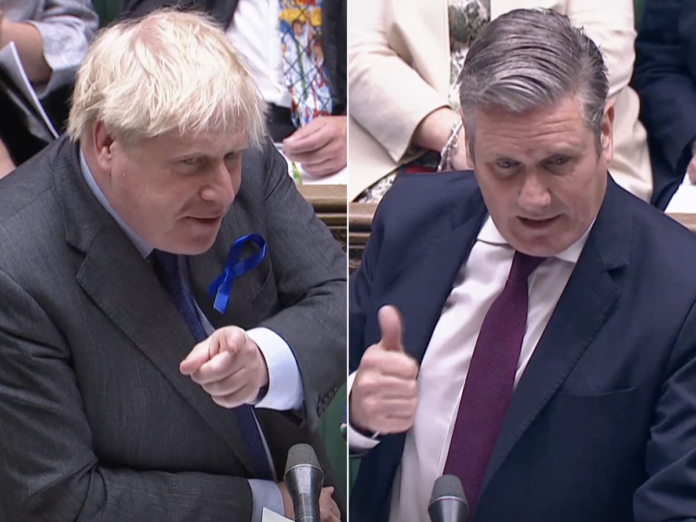 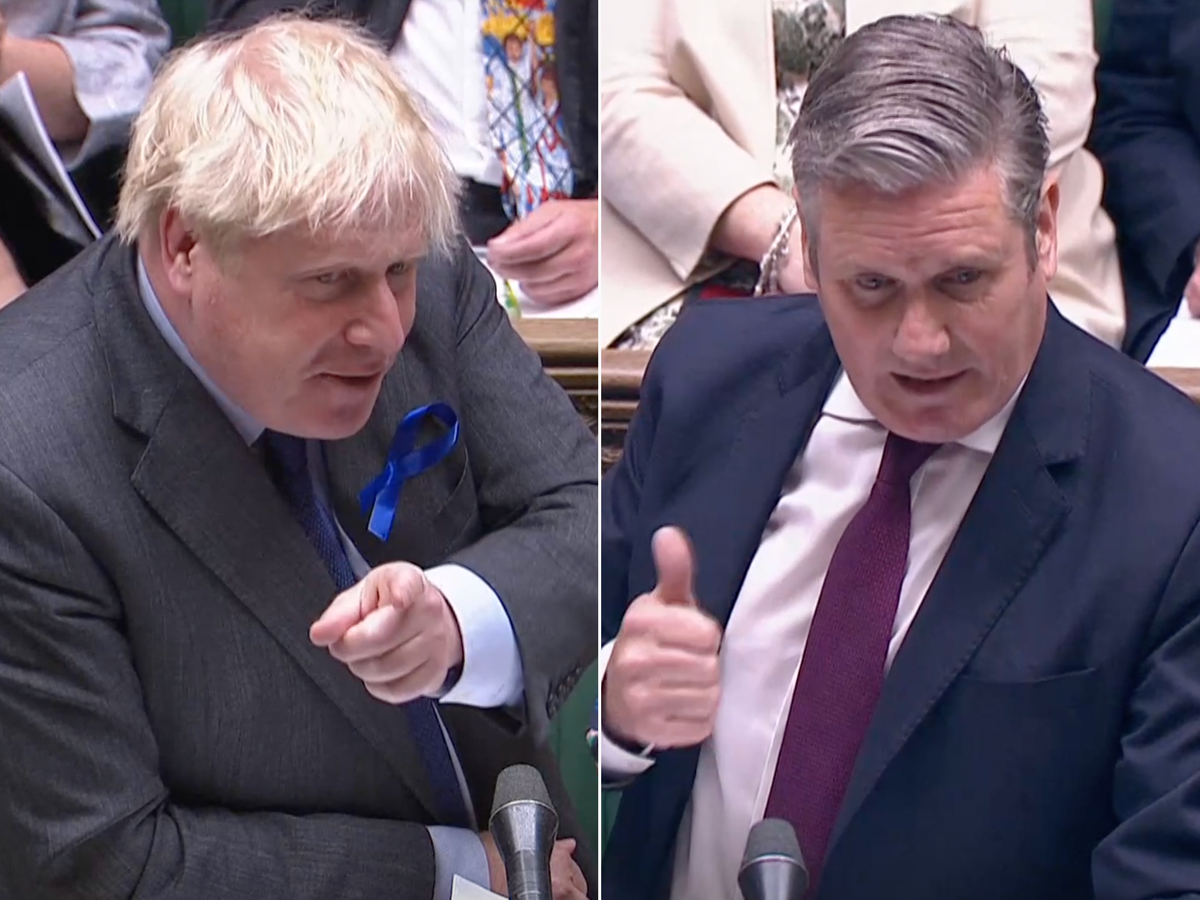 Jacob Rees-Mogg has been accused of unveiling a Brexit “gimmick” – a quarterly dashboard of reformed EU laws – which will “do nothing to address the real challenges that the public face today”.

The Brexit opportunities minister sought to claim the new digital publication would usher in a “British-style revolution”, pointing to regulations on vacuum cleaners as he spoke of the need to “ultimately grow the economy and cut the cost of living”.

Labour frontbencher Stephen Doughty called it “quite extraordinary” for the government to introduce what “simply appears to be a vanity project” on the day that inflation topped a 40-year high of 9.1 per cent.

Earlier at PMQs, Boris Johnson failed to deny he offered his then-lover Carrie Symonds a top job while foreign secretary, ducking the question when challenged in the Commons.

Shortly afterwards, justice secretary Dominic Raab proposed a new Bill of Rights which will allow the government to ignore interim rulings from a European court and potentially make it easier to deport foreign offenders.

A Labour MP is taking time away from work after suffering from “a sustained campaign of misogynistic harassment and abuse”.

Apsana Begum, MP for Poplar and Limehouse, posted a statement on Twitter on Wednesday night that said she attended hospital on 12 June and was subsequently signed off work by her GP.

She said: “For the duration of my time as a Member of Parliament, I have been subjected to a sustained campaign of misogynistic abuse and harassment.

“As a survivor of domestic abuse, it has been particularly painful and difficult. This abusive campaign has had a significant effect on my mental and physical health.”

Ms Begum, who was part of the 2019 intake of MPs, added that her staff and office will still be open to help people in her east London constituency while she is off sick.

David Warburton, who was suspended by the Conservatives over allegations of sexual harassment and cocaine use is facing a fresh Commons inquiry.

Mr Warburton was disciplined by his party and is already being investigated by parliament’s Independent Complaints and Grievance Scheme (ICGS), it is understood.

Now the MP for Somerton and Frome is also the subject of a probe by the parliamentary standards commissioner into whether he broke the MPs’ code of conduct on three counts.

They are “paid advocacy”, failure to declare an interest, and over rules concerning the declaration of “gifts, benefits and hospitality”.

Labour’s next leader should be a woman, says Harman

Harriet Harman has said that it was “downright embarrassing” that the Labour party had never had a woman at its helm and that the next leader should be a woman.

“As and when we do in the far-distant future have a leadership election, it has got to be a woman the next time around, because it’s just downright embarrassing that the Conservatives have had two and we haven’t even had a woman leader in opposition, let alone a woman prime minister,” she told GB News.

We took our places for Leader of the Opposition’s Questions, expecting Boris Johnson to ask Keir Starmer six times to condemn the rail strikes.

But because everyone expected the prime minister to do it, he was robbed of the element of surprise.

That advantage lay with Starmer instead, who started by praising the “plucky” Conservative candidate in the Wakefield by-election.

The Labour leader had no solutions, but he looked in charge at this week’s Prime Minister’s Questions, writes John Rentoul.

“The one government in Europe that is actually standing up to [Vladimir] Putin is completely distracted in this way,” Mr Ellwood said.

“I say to the unions, please don’t be Putin’s friend. Return to the talks today so we can get the country moving again.”

Bypoll in Tory stronghold of Tiverton and Honiton ‘neck and neck’

A crucial by-election in the Conservative stronghold of Tiverton and Honiton is “neck and neck”, according to the Liberal Democrats, who are aiming for a major political upset in the Devon seat.

As voters prepare to head to the polls on Thursday in two by-elections, Sir Ed Davey suggested his party “could be on the verge of a historic victory” in the southwest constituency overturning a 24,000 Tory majority.

The second ballot will be held in Wakefield, which is a “red wall” seat Sir Keir Starmer is hoping to seize back for Labour after it fell to the Tories at the 2019 election for the first time since the constituency was created in 1932.

Conservative MPs told The Independent that a double by-election defeat on Thursday would be a “disaster” for the embattled Boris Johnson, who narrowly survived a vote of no confidence a fortnight ago.

Millions of rail passengers across Britain face fresh disruption on Thursday after the RMT union accused the government of “wrecking” negotiations, my colleague Tom Batchelor reports.

Rail services are being severely disrupted this week after around 40,000 members of the union, working for Network Rail and 13 train operators, voted to stage walkouts in a row over jobs, pay and conditions.

Talks were held on Wednesday between the union and industry bosses in a bid to break the deadlock, but they ended without agreement.

Mick Lynch, the RMT general secretary, said: “Grant Shapps has wrecked these negotiations by not allowing Network Rail to withdraw their letter threatening redundancy for 2,900 of our members.

“Until the government unshackle Network Rail and the train operating companies, it is not going to be possible for a negotiated settlement to be agreed.”

He added: “We will continue with our industrial campaign until we get a negotiated settlement that delivers job security and a pay rise for our members that deals with the escalating cost of living crisis.”

Boris Johnson to hold talks with Charles in Rwanda

Boris Johnson and the Prince of Wales will meet for talks over tea in Rwanda after the heir to the throne’s reported criticism of his government’s policy of sending asylum seekers to the country on a one-way ticket.

The prime minister will join Charles tomorrow in the country’s capital Kigali, where they are attending the Commonwealth Heads of Government Meeting.

It was understood that Mr Johnson will visit Charles for a cup of tea on Friday morning, but that the Prime Minister is not eager to raise the asylum policy.

“They are due to meet, obviously they will encounter each other during the summit but they are due to have a bilateral discussion as well,” Mr Johnson’s official spokesman said.

Attempts to rebuild the reputation of the House of Commons have received a boost after MPs agreed to establish a new body to examine reforms.

The Speaker’s conference will take the form of a committee which will have the power to ask for witnesses, papers and records.

It will also make recommendations upon the contractual arrangements for staff of MPs and will produce its first report before the end of October.

Commons Speaker Sir Lindsay Hoyle pushed for MPs to come together to discuss changes following a series of scandals, capped by then Tory MP Neil Parish admitting he twice watched pornography in the Commons.

Exclusive: New asylum seekers still being locked up for removal to Rwanda

New asylum seekers are being locked up in order to be deported to Rwanda even after court challenges raised questions about whether the controversial removal flights would ever be able to begin.

Campaigners accused ministers of being “untethered from any sense of morality or legality” after it emerged that people seeking refuge in Britain have been placed in detention centres following the grounding of last week’s planned flight.

The Rwanda policy will be subject to a judicial review hearing on 18 July, where a High Court judge will assess whether it is lawful.

Our social affairs correspondent May Bulman has the full exclusive report here:

Census 2021: How England and Wales have aged over the past...