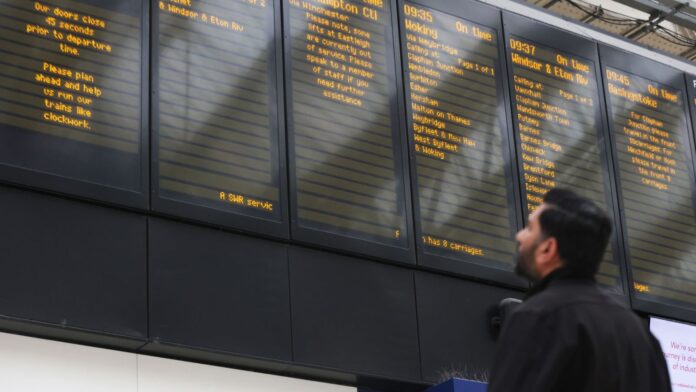 Rail strikes could “escalate” unless a settlement is reached for all workers in the industry, the RMT’s general secretary has warned.

Mick Lynch told Sky News that more train drivers might enter the dispute – and “other people are balloting in this industry too”.

When asked whether further strikes may take place, he said: “There’s plenty of time. We have to give two weeks’ notice of any industrial action. We’re going to take a pause next week and consider everything.”

It comes as a second day of walkouts across 13 train operators gets under way – with only a handful of services running up and down the country.

Commuters have also suffered knock-on effects on the days in between each strike, with the third and final day of industrial action set to take place on Saturday.

Mr Lynch was asked whether he was optimistic about an agreement being reached that would avoid walkouts happening this weekend.

Speaking at Euston station’s picket line, he said: “It’s a tough job. It will take a lot of progress to get that strike off. I can’t see that happening today from where I am, but we will work constructively with the companies.”

In an earlier interview, the union leader had told the BBC that his members wanted a “guarantee of no compulsory redundancies”.

Mr Lynch also warned: “If we don’t get a settlement it’s extremely likely that there will be [more strikes].”

He is calling on Network Rail to withdraw a letter that threatens redundancy for 2,900 workers.

Read more: What you need to know about the disruption

Beyond job security, another concern for RMT is pay – with the union claiming many of its members have not seen their salaries rise for two or three years.

The general secretary told Sky News that an offer of 4% would be “underpowered and undervalued” because it fails to fully address the impact of the cost of living crisis.

Under new plans put forward by the government, agency workers could be allowed to fill in for striking staff.

Subject to parliamentary approval, the changes are made through a statutory instrument and are set to come into force in the coming weeks and will apply across England, Scotland and Wales.

A Rail Delivery Group spokesman has called on the RMT’s leadership “to continue to talk so that we can secure a thriving long-term future for the railway and its workforce”.

It has urged passengers to only travel by rail today if it is “absolutely necessary” – and to ensure they know the times of the first and last trains on their routes.

UK will stop Kabul when US pulls troops out, says defence...