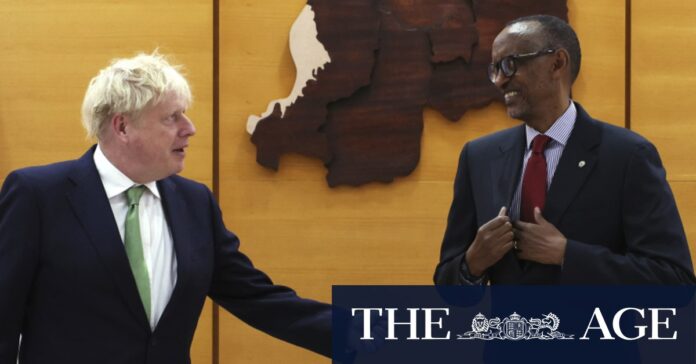 “I’m delighted that Prince Charles and everybody are here today to see a country that has undergone a complete transformation, or a very substantial transformation,” he said.

“And if I’m seeing the Prince tomorrow of course I’m going to make that point,” he said.

Prince Charles was reported to have called the UK’s plan to copy Australia’s offshore solution for asylum seekers to journey by boat “appalling”.

Clarence House has not denied the report. The monarch is expected to remain politically neutral.

Charles and Johnson are due to catch up for a “cup of tea” on Friday morning in Kigali.

Both Charles and Johnson have met Kagame in Kigali. Johnson praised Kagame’s “moral stance” on Ukraine, as well as the proposed migrant deportation plan, according to a spokesman.

In a speech at a violence against women and girls event, Camilla, Duchess of Cornwall highlighted Kagame’s commitment to improving women’s rights, noting that Rwanda was ranked seventh in the world in terms of women’s rights and opportunities.

“On International Women’s Day earlier this year, I was profoundly touched by President Kagame’s powerful message on social media, which read, ‘Equality is a right, not a favour’,” Camilla said.

“So let us bear His Excellency’s words in mind as we focus on violence in the home against women and girls today and remember that we are seeking rights, not favours.”

In his first address ahead of the official Commonwealth Heads of Government summit, Johnson likened the grouping, often maligned as a disparate and redundant relic of the British Empire, as a fertiliser.

“What if there was a miracle fertiliser, a fertiliser of business that grew your business that expanded your profits and cut your costs by 21 per cent?” he told the Commonwealth Business Forum.

“There is such a fertiliser and I’ll tell you ingredients … it’s a common language, it’s a familiar sense of our legal and administrative systems, it’s a shared system of mutual trust between us and that system is called the Commonwealth.

“That fertiliser knocks 21 per cent off the cost of trade between Commonwealth members,” he said.

Hotel bookings and flights race ahead on back of grand prix,...