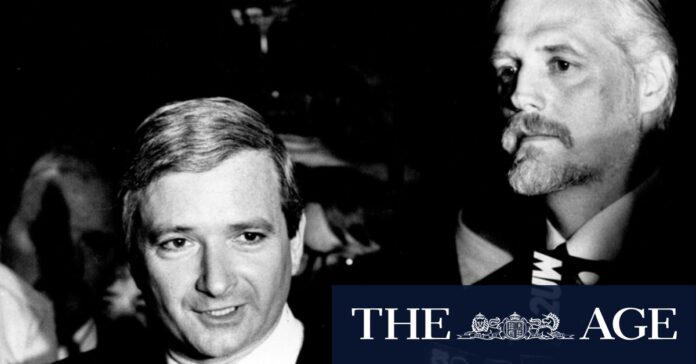 First published in The Sydney Morning Herald on June 25, 1992

Mr John Fahey is the new Premier after Mr Nick Greiner resigned yesterday following the threat by the three non-aligned Independents to bring down his Government by voting for a motion of no-confidence in it.

Mr Fahey, after securing the Government’s future by gaining the Independents’ agreement, immediately moved to steady the Coalition, racked by 24 months of controversy following the resignation of Dr Terry Metherell.

He said he was “determined to ensure that the instability surrounding the Government in his State over the past several weeks disappears, and disappears from this moment”. He wanted to “move forward to govern the people of this State as we have done throughout the past 4 1/2 years or so, and that we do it with the same drive, the same commitment, the same dedication, and with the same results that have been apparent to everybody in very, very difficult times”.

The Minister for Tourism and State Development, Mr Yabsley, who had pledged to resign if Mr Greiner went, also quit.

The Independents insisted that Mr Greiner and Mr Moore resign following the finding of Mr Ian Temby, QC, the head of the ICAC, that they had acted corruptly in the resignation of Dr Metherell and his appointment to a $110,000-a-year Public Service job.

This was despite a Supreme Court appeal against the findings of Mr Temby which is due to begin next Tuesday.

Bergman Island review: A beguiling riff on love from a director...