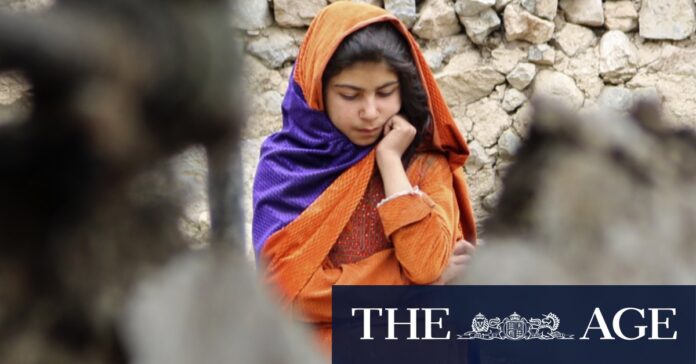 The quake hit in the early hours of Wednesday morning (Kabul time) about 44 kilometres from the city of Khost, near the Pakistani border, and was reportedly felt as far away as India.

Paktika province, a remote rural area about 260 kilometres south of Kabul, was the worst affected with up to 200 people killed and 100 people injured.

According to the latest update from the United Nations, 1800 homes in the district of Gayan were also destroyed, the equivalent to 70 per cent of the housing stock.

Noruz said entire villages in the farming region had been razed, including community centres and mosques.

“There’s no infrastructure to provide them the help that they need,” he said. “The nearest medical centre, or something that can be called a medical centre, is five or six hours away.”

Helicopters loaded with supplies and first responders were deployed to the remote region from Kabul by the country’s Ministry of Defence on Wednesday but struggled to land due to the heavy rain and wind lashing the area.

The Afghan Red Crescent Society has sent food packs, tents and other basic items to the affected areas but muddy roads and challenging weather conditions have hampered the charity’s efforts.

Rescue efforts are further complicated by the departure of many international agencies from Afghanistan after the Taliban takeover last year and limits on the transfer of funds to local organisations from overseas.

Afghan Red Crescent Secretary-General Mohammad Nabi Burhan said difficult weather conditions and a shortage of aid and financial resources were the biggest challenges for organisations providing help on the ground.

“The situation is very tense,” he told the Sydney Morning Herald and The Age. “It is hard to get all the injured to hospitals. The bodies are still searched for.”

Burhan said people in affected areas were “very poor and vulnerable” and would need immediate humanitarian assistance and longer-term support to recover.

Resolution due on NSW lockdown extension